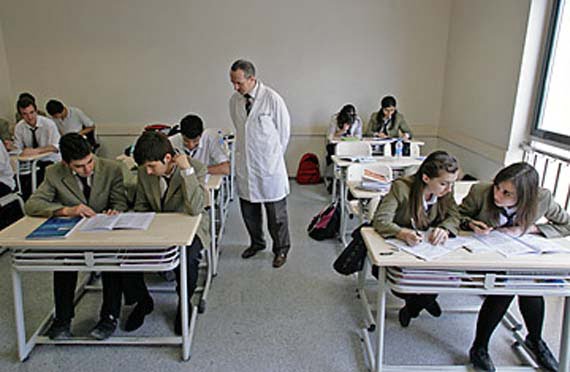 If anything, the tiny, informal gathering in Diyarbakir reveals a side of the Gulen movement that is key to its power — its management at the grass-roots level. Opening an Excel file on his laptop, Ozdemir the teacher asks each of the eight men present to report how much money they have raised for the construction of four new reading halls in the city. Each of the members, Ozdemir tells me, represents a group of lower-level followers who have been asked to pitch in, along with friends, neighbors and family.

It is Monday evening in Diyarbakir, a city in Turkey’s southeast, and a weekly meeting of several local members of the so-called Gulen movement (aka Hizmet movement) has begun with a book reading. One of the eight men present — this is an all-boys affair — picks up a paperback by Fethullah Gulen, the charismatic Islamic preacher after whom the movement is named, and reads out a few paragraphs. The subject is one of the central tenets of Gulen’s philosophy:hizmet, service to others.Once the reading ends, a few of the other members — smiling beneath cropped mustaches — begin to extemporize on the difficulties and rewards of teaching and the challenges of shaping young minds.

Many Turks view the Gulen Movement with suspicion. The group has drawn comparisons among the conspiracy-minded to the freemasons; it has been accused of being a shadow government and more than once of trying to engineer an Islamist takeover of Turkey; and in recent years, some of its opponents have found themselves snared in legal proceedings. There’s little reason to expect such issues to come up during an informal gathering of local Gulenists in a place like Diyarbakir. The movement not only forswears any role in politics, but is also said to discourage discussion of political issues among its followers. (A student who stayed at one of the movement’s dormitories in Istanbul told me that he, an international relations major, was asked not to read or discuss books on politics in his room.) Still, the next item on the Diyarbakir meeting’s agenda comes as something of a surprise.

It involves the day before, Sunday May 13: “What did you do for Mother’s Day?”

The question comes from Bilgi Ozdemir, a public school teacher who is presiding over the gathering. A tour de table follows. One of the men reports that he and a group of friends cooked dinner for a group of women. All the time they are the ones cooking, he says, but on Mother’s Day “we told them to sit still and let us prepare the food.” Another man took a group of moms to a picnic outside Diyarbakir. Yet another organized a sightseeing tour of the city, including visits to a mosque and a reading hall — the local equivalent of a Boys and Girls Club — run by fellow Gulen supporters.

As the meeting progresses, it’s hard to avoid the impression that the men, all of whom have regular jobs, have much time for anything other than hizmet. For the months of May and June alone, Ozdemir’s circle, one of many similar Gulen groups in Diyarbakir, has scheduled at least a dozen events. Fundraisers, trips, charity functions: one for Nurses Day; another for Disability Week; and still more for the International Day against Drug Abuse. They might as well belong to the Rotary Club. Except that hizmet can be a little all-enveloping.

Nearly half a century after Fethullah Gulen began delivering impassioned sermons in Izmir, a city on Turkey’s Aegean coast, the religious movement he helped inspire counts as many as six million followers. (There is no formal membership structure, Gulenists say, making exact numbers impossible to compute.) The largest religious movement in Turkey, Gulen sympathizers are known to run hundreds of schools, several media outlets, including Zaman, the paper with the highest circulation in Turkey, as well as a bank, a number of foundations, and a major charity.

If anything, the tiny, informal gathering in Diyarbakir reveals a side of the Gulen movement that is key to its power — its management at the grass-roots level. Opening an Excel file on his laptop, Ozdemir the teacher asks each of the eight men present to report how much money they have raised for the construction of four new reading halls in the city. Each of the members, Ozdemir tells me, represents a group of lower-level followers who have been asked to pitch in, along with friends, neighbors and family. Celal, a physiotherapist seated to my left, has managed to raise 4,000 lira, or about $2,200. Others report having raised 1,400, 1,500 or 250 lira. Ozdemir carefully records all the sums. For transparency’s sake, he tells me, we prefer bank transfers. “If donations are made in cash, we will provide receipts.”

Apart from nominal contributions for special projects, it is local businessmen sympathetic to the movement’s cause who often foot the Gulenists’ bills. “When I was in high school, some people inspired by hizmet helped me financially,” says Aladdin Korkutata, who heads DIGIAD, a local business association. “Now that I’ve reached my target I am happy to help others.”

Leading lights within the movement usually insist that that Gulen-affiliated institutions are administered autonomously, with little supervision from above. Meetings in Diyarbakir, however, show that at least here, at the local level, the movement runs a very tight ship. Most local Gulenists have no difficulty producing data about the movement’s educational activities. In the southeast as a whole, Gulen followers run 57 elementary schools, Ali Pehlivan, a principal at one of the schools, tells me. In Diyarbakir province alone, another Gulenist says, the movement’s 27 reading halls cater to roughly 4,500 children. FEM, a network of Gulen dershanes, or cramming schools, operates 14 local branches, attracting about 11,000 students per year. The total number of FEM branches in Turkey is “roughly” 615.

At one of dershanes, Bulent Ince, the headmaster, explains that 2,000 lira, the price of tuition, buys local high schoolers much more than a 10-month prep course for Turkey’s feared university entrance exam. Students, he says, are also assigned so-called teacher-guides, who look after them in and outside of class, and even after they enter college.

The teacher-guides, says Ince, serve as role models. “None of them smoke or drink,” he says. Many become the teens’ confidants, calling on them regularly, offering advice, teaching them “love for their parents, love for their country, love for others,” and “Islamic values.” “Sometimes, our kids will share things with their teacher-guides that they will not share with their parents,” says Ince. Students can phone their guides late at night to talk about their problems. “It’s 24 hour hizmet.”

When students enter college — FEM students score better on the entrance exams than most others — they remain under the watchful eye of Gulen followers. If a student goes off to study in another city, says Ince, a teacher will accompany him there and try to place him in a dorm or a house where “people don’t smoke and drink, and where they pray.” Otherwise, he says, “we will introduce him to our friends, who will keep in touch with him.” After graduation, he explains, “we will help him find job, or make him a teacher and send him abroad.” As he puts it, “If you’re in hizmet, you’re never alone.”

It is heartbreaking that a concert, a joyful event meant to bring people together to enjoy music and friendship, so quickly devolved into a scene of violence, chaos and terror. Any attack on the sanctity of human life is an attack against humanity. I will continue to denounce without hesitation any use of violence to promote an agenda – whether religious, political or ideological.