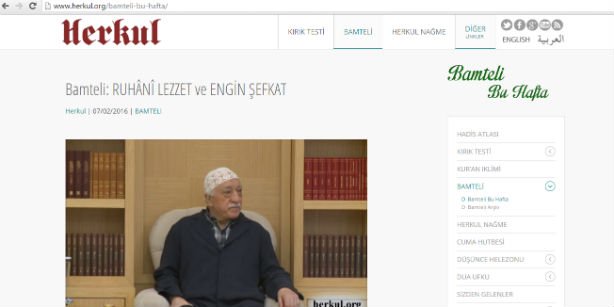 Turkish users could not access the website on Thursday but met with a notification saying TİB imposed a “protection measure” for the website based on a decision taken by the İstanbul 7th Penal Court of Peace on Thursday.

The website’s editor, Osman Şimşek, condemned the ban on Twitter. “Access to our herkul.org website was blocked by a court decision. Now it will not be able to build bridges among our hearts… God is generous!” he tweeted.

The move comes amid increasing pressure on the Gülen movement inspired by Gülen.

Since Turkey’s largest-ever corruption investigation was made public on Dec. 17, 2013, following police operations in the homes and offices of people from the inner circle of the Justice and Development Party (AK Party), then-Prime Minister and current President Recep Tayyip Erdoğan and the AK Party leadership have accused sympathizers of the Gülen movement, especially those in the police forces and judiciary, of plotting to overthrow the government. The movement strongly rejects the allegations brought against it.

Erdoğan has openly announced on several occasions since December 2013 that he would carry out a “witch hunt” against anyone with links to the movement. He has also ordered officials in AK Party-run municipalities to seize land and buildings belonging to institutions that are linked to the Gülen movement by any means necessary.

My source informed me that some clandestine figures from the deep state have been working on a project to portray the Gülen movement as having connections with international drug traffickers and international smugglers.