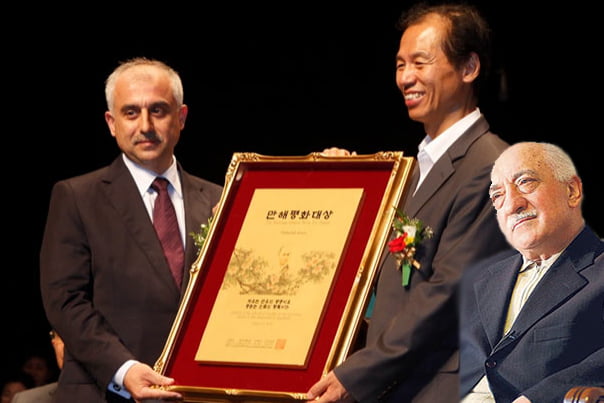 In a moment of respect and hope, Fethullah Gülen received the prestigious Manhae Peace Prize.

Journalists and Writers Foundation President Mustafa Yesil accepted the award on behalf of Gülen, who was not able to attend the ceremony due to health problems.

Yesil, who delivered a speech at the event, spoke highly of Gülen and his work with the Hizmet movement.

Gülen is a Turkish Islamic scholar well-known for his teachings promoting mutual understanding and tolerance between cultures.

He has pioneered educational activities in a number of countries, along with efforts to promote intercultural and interfaith activities around the world.

The goals and ideals of the Hizmet movement are to help people and to make lives better without expecting anything in return and to work for world peace.

Like his inspiring predeccessors, Gülen looks to continue his humanitarian goals and make the world a better place.

The Confederation of Turkish Businessmen and Industrialists (TUSKON) organized a meeting in Moscow on Thursday that brought together businesswomen from Russia and Turkey as part of its attempts to establish closer economic ties between the two countries. The businesswomen held talks to seek out business opportunities during the program.

Fethullah Gulen, Turkish scholar: “We were never completely aligned with any political party. But on the Kurdish issue, we were supporting the peace process before the government.” The Hizmet or service movement, through civil service initiatives, has been active in the region. It has focused on education, healthcare and religious affairs.