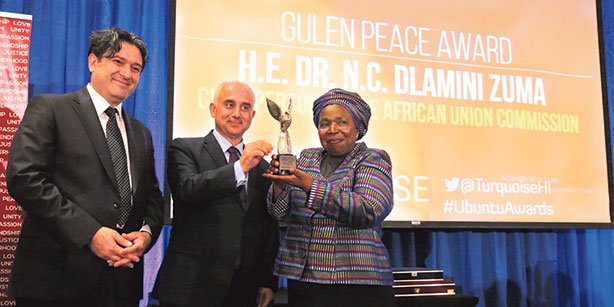 Dlamini-Zuma accepted her award from Mustafa Yeşil, the president of the Journalists and Writers Foundation (GYV), of which Gülen is the honorary chairman.

In her acceptance speech, Dlamini-Zuma said: “Africa has been stricken with great griefs for a long time. If people establish dialogue, they won’t take up arms. We must fight all kinds of racism and discrimination in order to sustain peace and development. We believe that conflict all around Africa can be solved with dialogue and consensus. I accept the Gülen peace award with great enthusiasm. Accepting this award also means accepting the duty of working ceaselessly to sustain peace. From now on, the African continent must be sure to double its efforts to establish peace and solve conflicts through dialogue, because I accept this award on behalf of the African continent and the African Union [AU].”

Underlining the importance of women in dialogue, Dlamini-Zuma added: “Women must be at the center of dialogue because we are full of love and don’t become instruments in games of [political] power. We can dream of a new world. We can make it come true.”

Yeşil also read a message from Gülen to those attending the award ceremony. “All people are created equal by God. Equality, freedom, honor, peace and justice, which are bestowed upon all humanity by God, constitute the basic values of all divine religions. … People like you, who represent high values of humanity and spread mutual respect, are dignifying society [on a universal scale]. I appreciate and honor your service to humanity through dialogue, tolerance, humanitarian aid and social justice. I also thank you for making it possible for me to share my thoughts in your exalted assembly,” the message read.

Speaking to the Cihan news agency after the ceremony, Dlamini-Zuma expressed her gratitude to the Kimse Yok Mu charity and to the Turkish Confederation of Businessmen and Industrialists (TUSKON). “The charitable work of Kimse Yok Mu is very meaningful. They extend a helping hand to the needy. On the other hand, TUSKON brings entrepreneurs [to Africa]. Africa needs entrepreneurs now more than ever,” Dlamini-Zuma stated.

The Fethullah Gülen Peace and Dialogue Award is bestowed upon individuals or organizations that are seen to have made noteworthy contributions to dialogue, peace and harmony in their societies.