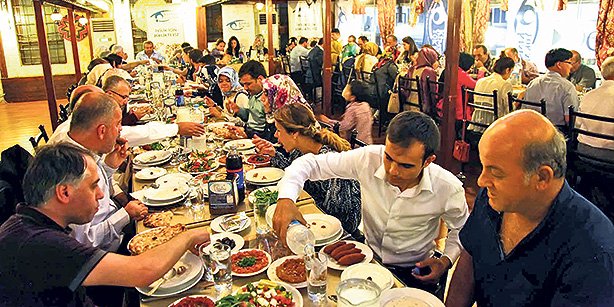 Religious leaders prayed for world peace at an event deemed the meeting of civilizations and organized by the Antakya Intercultural Dialogue Association (AKADİM) and Turkish aid organization Kimse Yok Mu in the province of Hatay on Saturday.

The president of AKADİM, İsa Aydın, pointed out that Hatay is an important place where people live together, and said good messages will come out of a meeting in which people who feel the same weakness in front of their god come together.

Eyüboğlu stressed the importance of love and said people live, become happy and make others happy with love. He claimed that it is not possible for souls without love to reach high spiritual values, and the qualities that make a man are highly damaged in a person who does not love. He pointed out that the future will be built on the values of love, affection and tolerance and said the duty of those present was to carry the beauty that they have in Hatay to the world.

The men of religion gathered around a dinner table and prayed for world peace after speeches were given.