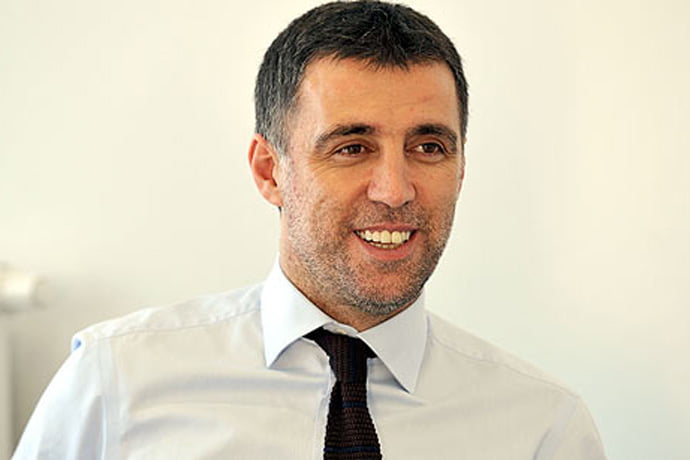 The resignation came after Şükür expressed his objection to government proposal to shut down prep schools, which help students for university and high school admission exams.

İstanbul MP Şükür said he was personally offended by what he called “hostile moves” against the Hizmet movement led by Turkish Islamic scholar Fethullah Gülen.

“For over 20 years I have known and loved the Hizmet movement,” Şükür said in a statement carried by several Turkish news outlets.

“To treat these people who have staunchly supported the government in every issue … as enemies is at best nothing but ingratitude,” the former Galatasaray, Inter Milan and Blackburn Rovers soccer player said.

Şükür’s departure from the AK Party is the most tangible fallout yet of a rift over government proposal to close down prep schools.

Gülen’s schools, which have been set up across Africa, the Middle East, the United States and Asia, are a key source of income but also a powerful instrument of influence, especially in Turkey, creating a network of elite contacts and personal loyalties.

The Hizmet movement has helped Erdoğan’s Justice and Development Party (AK Party) win a growing share of the vote in three successive elections over the past decade.

But there have long been ideological differences, with many of Gülen’s followers seeing him as a more progressive and pro-Western influence on Turkey than Erdoğan, whose views on issues from abortion to alcohol consumption have triggered growing accusations of interference in Turkish private life.

Since he came to power in 2002, Erdoğan has built his own body of wealthy loyalists, largely from the same religiously minded professional class that revere Gülen.

I felt obliged to deliver the statement below after emergence of some recent developments hurting anybody who has conscience.

First of all, I need to clarify that the politics has never been a priority for me. But it wouldn’t be nice to refuse sincere invitation of Prime Minister [Recep Tayyip Erdoğan] because of the position he represents and my respect for his personality. I accepted Mr. Prime Minister’s invitation [to take part in politics]. The ruling Justice and Development Party (AK Party) has its mark on significant achievements and reforms in the past 11 years. However, some negative and irrational approaches that came to forefront with the issue of prep schools closure hurt people’s conscience.

It is not a true approach to portray dershanes [prep schools] as the only source of woes in education system despite existence of dozens of other chronic problems that need to be solved. This kind of approach does not correspond with the line that the party has represented over the past 11 years. I’m not able to understand Mr. prime minister’s indifference to persistent explanations, complaints and demands despite the fact that he displayed wisdom in the past by backing down from some decisions upon opposition.

I had retained my hope that the issue of dershanes could evolve into a positive step by taking demands of sincere people into account. While expecting this, the comparison between dershanes and the Kurdistan Communities Union (KCK) — an umbrella organization that encompasses the terrorist Kurdistan Workers’ Party (PKK) — that was made in my presence and the fact that neither prime minister nor party headquarters showed reaction to this, let alone issuing an apology, hurt my conscience. Moreover, it wasn’t good to take the issue of dershanes to other areas.

I have known the Hizmet movement and Mr. Fethullah Gülen Hojaefendi for over 20 years. Treating the movement, which has strongly backed the government on any policy that benefits society, including the 2010 referendum, by persuading people after engaging them door by door, bringing thousands of people from abroad to vote in the referendum, and also praying for AK Party’s avoiding the closure case [in 2008], is nothing but disloyalty.

Those people whose dershanes are being shut down, and who are being expelled from state institutions and who face pressure and profiling which were described as immorality by our senior party officials, are this nation’s sons. Despite this fact, some headlines and accusations trying to depict as if these people engaged in criminal and dark activities, will go down in history as examples of sheer carelessness. And using [terrorist] organization, which recently gained wide currency, for this voluntary movement raises question that the issue is not confined to ‘dershanes’.

There were also comments suggesting that the expression of ‘Some people changed when they experienced comfort and prosperity’ refers to members of Hizmet movement. I don’t want to presume that Mr. Prime Minister intended to mean such a thing. But if these claims are true, it ignores sacrifice of millions of voluntary people. Do these people who represent our nation and flag around the world, working for peanuts without any material expectation, enjoy prosperity? Or does Mr. Gülen Hocaefendi who lives within a 20m2 small room for 15 years in exile and whose residence, desgined as a social facility to host guests, was unjustly described as a ’mansion’ by a [Turkish] media outlet, enjoy such prosperity? It is impossible to approve smear campaign and false accusations that aim to hurt this person who has no ambition but to serve his religion, his nation and the entire human kind during his entire life.

I take upon myself all those hostile acts, slander and insults against Mr. Hocaefendi as one of millions of voluntary members of this movement which has no objective but to serve this nation and humanity.

Everybody, including Mr. Prime Minister who knows me well knows that I have never had an expectation during my political career. I have never had a demand for myself, nor my family and relatives. My goal only was to make a small contribution to this political party which I viewed was doing right things. But after this point this is clearly impossible any more.

In the meantime, I also observe that some people that I viewed as friends have joined the chorus of ‘finishing the movement’ either as voluntary or due to pressure. This also makes me deeply sad. It is quite interesting that those people who visited Mr. Gülen Hojaefendi several times, and who attended Turkish Olympiad and meetings, praised the movement in the good day and then became suddenly silent. It is inexplicable that these friends who know better than me that those who remain silent in the face of injustice is tongueless devil prefer silence to taking action against defamation campaign and unjust acts. I expected that some people whether they are a journalist, an academic, or a religious figure, or a deputy or a bureaucrat to bravely take action to defuse tension and to help to scale back from the mistake. Unfortunately, nobody showed this courage except a few scrupulous opinion leaders and journalists.

I do know that some type of defamation campaign will be launched against my personality after this decision. I am used to numerous such situations throughout my sports career. In 2002, after I said I love Hojaefendi (Fethullah Gülen) during 32nd Day program of late Mehmet Ali Birand, I was called to testify in State Security Court so that what I said would be perceived as a crime. Without denying what I said, I expressed my feeling during my testimony. Today, there is no any single change in my thoughts. While I conclude my statement with these feelings, I declare, sadly, that I resign from the AK Party – where I joined with great hopes – and that I will continue my political life as a representative of my people and an independent member of Parliament.

I expect the prayers of our dear nation and I extend each and everyone one of them my deepest greetings and respect.