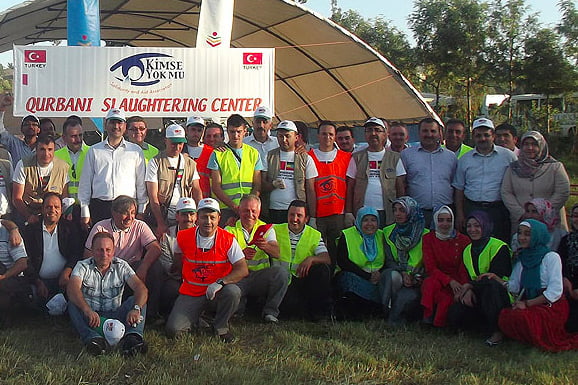 A slaughtering center in Yemen and Hizmet volunteers from Turkey

Turkish charity groups are once again preparing to help the less fortunate in Turkey and around the world during the upcoming holiday of Eid al-Adha (Feast of the Sacrifice), which is to begin on Nov. 6 and last for four days.

As a country that in past years has raised spirits among the nation’s impoverished residents and people in need throughout the world through the work of various Turkish charities, Turkey has once again rolled up its sleeves to distribute food, clothing, money and other forms of assistance to the less fortunate in most of Turkey’s 81 provinces and in over 120 nations around the world during this year’s Eid al-Adha. Most of this year’s donations are likely to pour into poverty-stricken African countries, but the needy at home will not be neglected.

In his latest speech broadcast on the herkul.org website, prominent Turkish Islamic scholar Fethullah Gülen called on Turks to donate sacrificial animals to hunger-stricken African countries, but also recommended people not neglect Turkey’s impoverished Southeast. “In my opinion, those who have sacrificed one animal so far [every year] should sacrifice two this year if they can. Those who can afford should sacrifice three and send one of them to those places [Africa]. But, those who can afford should also certainly join efforts to bring the spirit of Eid to people in the Southeast and [Turkey’s] suburbs who wait for assistance,” Gülen said.

Stating that Muslims should mark Eid al-Adha with the understanding of the need to help others and to maintain brotherhood among people, Gülen said, “This holy religious holiday is a significant occasion to come together.”

During the four-day holiday, which takes place on Nov. 6-9 this year, Muslims worldwide remember the willingness of Abraham to sacrifice his son as an act of obedience to God, before God intervened to provide him a ram in his son’s stead. The meat from the sacrifice is divided into three parts. The family keeps one-third of the share, another third is given to friends and neighbors and the last portion is donated to the less fortunate. Many in Turkey elect to pay for someone else to sacrifice an animal instead of heading down to the butcher to do it themselves, with many opting to send the money spent paying for a sacrifice to support those in need in other nations.

Turkish aid groups announced on Tuesday that they have received thus far the most Eid al-Adha donations for drought and conflict-ridden Somalia, where Turkey has been a leader in the international community for its outpouring of support, this year, according to an Anatolia news agency report.

Kimse Yok Mu Konya branch President Hasan Kıratlı said the aid organization aims to reach unfortunate people in every province of Turkey as well as across the globe this Eid al-Adha. The sacrifice of animals takes place in modern facilities, Kıratlı explained. “The names of the donors will be read one by one, and after the sacrifices are made we will visit the families and deliver the meat,” he explained.

The cost for sacrificing an animal in Turkey is TL 500, $120 for Asia and Africa, $140 for Central and South America, $250 for the Middle East and the Balkans and $450 for Palestine. Kıratlı added: “So far 50 percent of the donation requests we have received have been for African countries. Somalia ranks first among African countries by a wide margin.”

But Kıratlı reiterated that though Somalia is indeed in need of much support, there are poor and needy people in other countries as well.