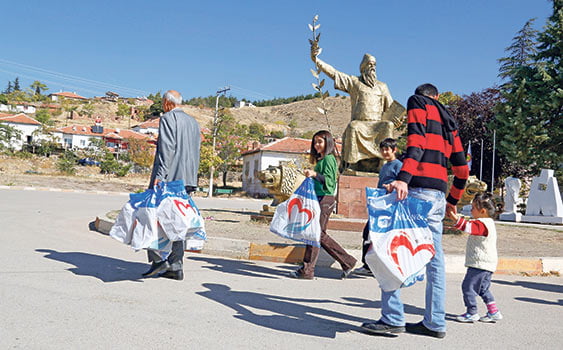 The Turkmen -Alevite-Bektasi Association (TABA) and the Kimse Yok Mu Association helped families in Kirklareli’s Hasandede town, Turkey, who could not afford to sacrifice an animal in this Eid al-Adha.

During Eid al-Adha meat from sacrificed animals were distributed to 100 predetermined needy families making them enjoy the holiday. The distribution was coordinated by the president of TABA, Ozdemir Ozdemir. Meat distribution started after the Hasandede Alevite leader, Dede* Beydili Demirhan made a communal  prayer. Ozdemir stated that their aim is to enhance Turkey’s unity and brotherhood and said, “Alevite and Sunni brothers/sisters are distributing meat together; we will stay together from now on.”

Also in Bagcilar, Istanbul, Alevite and Sunni citizens celebrated the Eid al-Adha together. Many Alevite and Sunni people attended the sacrificial ceremony at the Haji Bektash Veli Culture Association. Another similar gathering took place in Sivas. Officials from Cem Foundation, Sivas Industrialists and Businessmen Association (ASSIAD), Kimse Yok Mu, September 4 Culture and Solidarity Association (DEKDER) attended the event. It started with the prayers and followed by sacrificing the animals.

* A Dede is a socio-religious leader in the Alevi community.