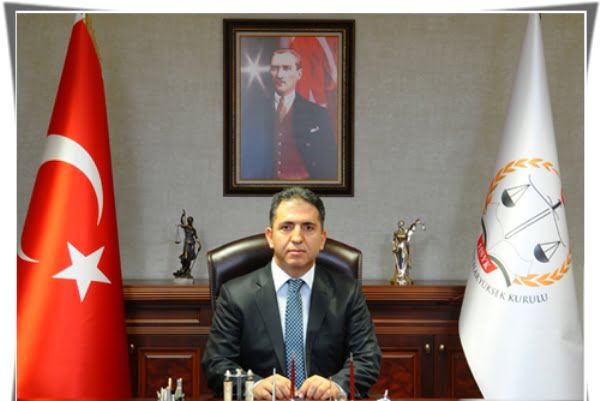 Turkey will have to say goodbye to a fair system of justice as well as democracy and the rule of law if President Abdullah Gül approves the new Supreme Board of Judges and Prosecutors (HSYK) law, according to prominent legal experts.

The law was approved by Parliament on Feb. 15 after a heated debate and a brawl among the deputies of the ruling and opposition parties. The law, which lies at the center of harsh criticism as it gives the executive branch a much tighter grip on the judiciary, will be submitted to the president for his approval later this week. The president, by law, has 15 days to examine the draft, and he will either approve it or return the law to Parliament. If he returns the draft, Parliament can adopt it as is or make changes to it as per the president’s concerns.

Drastic changes will be made to the country’s judicial system if the HSYK law is approved by the president. The law allows the undersecretary of the Ministry of Justice to be elected chairman of the HSYK. In addition, the law empowers the justice minister in the HSYK in a number of ways, such as authorizing him to reshape the composition of all three chambers of the board and to initiate disciplinary procedures for HSYK members.Once the law is approved by the president and published in the Official Gazette, the secretary-general and his aides, the head of the committee of inspectors and his aides, all inspectors and administrative staff working for the HSYK will be removed from their jobs. New individuals will be appointed to their positions by the justice minister within 10 days. The law prevents the staff who have been removed from seeking legal redress.

The law represents a major step back from a government-backed constitutional referendum in 2010 that brought a more democratic and pluralistic structure to the HSYK, by which most members would be elected by their own community of some 12,000 judges and prosecutors.

According to Professor Bülent Çiçekli, an HSYK member who had been appointed to the board by President Gül, if the law is approved by the president and enters into force, Turkey will have to “bid farewell to the separation of powers and the rule of law.”

In remarks to Today’s Zaman, Çiçekli said the newly accepted law gives special authorities to the justice minister and, thus, members of the board will become “civil servants” of the minister rather than independent jurists. “The new law is against the [Turkish] Constitution and EU norms. Furthermore, it represents a regression from our standards of the rule of law and spells an end to law and justice in the country,” the professor stated.

According to the HSYK law, the topics to be discussed by the HSYK during board meetings will be selected by the justice minister. The minister will also decide whether to allow the board to discuss matters that do not directly concern the HSYK during its meetings. In addition, judges and prosecutors will have to seek permission from the justice minister if they intend to travel abroad for purposes such as training and attending courses.

The HSYK’s Çiçekli also said the new law seeks to turn the board into a justice minister-affiliated general directorate. “The minister will have very broad authorities over the board; HSYK members cannot serve independently. It would not be wrong to liken the new law to [the] Sept. 12 [1980 coup period],” he noted.

With the new law, the HSYK will no longer enjoy a pluralist identity, according to the professor, but will instead become a majoritarian board. “I am afraid that we [Turkey] will be carried to the past in terms of standards of the rule of law and Copenhagen criteria. The justice minister will become a specially authorized minister. A decision to initiate an investigation for board members lies between the two lips of the minister. If the law is approved [by the president] and enters into force, we may bid farewell to the separation of powers and the rule of law,” he noted.

Commenting on the recent removal of prosecutors who had launched the major corruption investigation from the case, Çiçekli said the removals will impact the “health” and “fairness” of the ongoing probe. “People will grow more suspicious of the government’s interference in the investigation,” he said. Asked about the prime minister’s claims of the existence of a “parallel state” or the Hizmet movement behind the investigation, the professor said, “These are not claims that are based on concrete information or documents.”

The planned changes to the HSYK come amid a heated debate over the future of a corruption and bribery investigation involving several members of the AK Party government. The sons of two former ministers are among 24 high-profile individuals, including a number of bureaucrats and businesspeople, who were arrested in mid-December on corruption and bribery charges as part of the investigation. Several of the suspects were released pending trial last week.

A constitutional law professor, who wished to remain anonymous due to a recent amendment imposing disciplinary action on academics for comments to the media about official issues, told Today’s Zaman that there is no doubt that the new HSYK law is against the Constitution. “We are faced with a law that seeks to increase the authority and dominance over the board. One does not need to be a jurist to see that this law violates the Constitution,” he stated.

The professor also said the law will bring about many problems for the rule of law in Turkey. “If approved by the president, an independent judiciary will be a dream for us. The government will form its own judiciary by using the authority of the justice minister over the HSYK. This will spell an end for the rule of law,” he added.

CHP fights for annulment of law

The Republican People’s Party (CHP) has set its eyes on the Constitutional Court to prevent the law from entering into force.

CHP parliamentary group deputy chairman Engin Altay said his party will take the law to the Constitutional Court without waiting for the president’s decision to either approve or veto the legislation. However, he did not cite an exact day for the appeal. “Our colleagues [CHP officials] are working on the appeal. We will submit it to the Constitutional Court either today or on Tuesday,” Altay stated on Monday.

The CHP had not submitted its appeal by the time Today’s Zaman went to print.

Gürsel Tekin, the CHP deputy chairman, said he believes that the “president will do what is necessary,” implying that he expects Gül to veto the HSYK law.

In addition, CHP Deputy Chairman Faruk Loğoğlu said he hopes his party will receive a “positive response” from the Constitutional Court after its appeal to the top court. Speaking during a press conference in Parliament on Monday, Loğoğlu said: “My colleagues [CHP officials] are making preparations for an appeal at the Constitutional Court.” Loğoğlu added, however, that he does not known when exactly the appeal will take place.