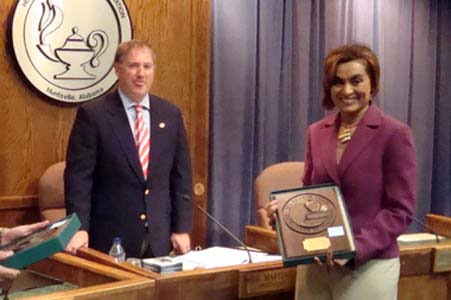 Chanda Davis, right, receives recognition as one of the 2009 Huntsville Schools System Teachers of the Year from from former school board chairman, Doug Martinson. Davis will be presented with the Education Award for fostering intercultural understanding and connections by the Peace Valley Foundation during their 2013 Dialogue Dinner in Huntsville on Thursday, April 18, 2013. (Courtesy of Steve Campbell)

A specialist in comparative theologies, Professor Loye Ashton, will deliver the keynote address at the 2013 Peace Valley Foundation’s Dialogue Dinner and Award Ceremony in Huntsville on Thursday, April 18, 2013.

The annual dinner, sponsored by the non-profit organization dedicated to solving educational, cultural, environmental, social and humanitarian challenges, provides an opportunity for building bridges between people of different cultural and religious traditions.

This year’s dinner will begin at 6 p.m. in the Grand Ballroom of The Huntsville Marriott next to the U.S. Space & Rocket Center.

Awards will be presented to local professionals who build interfaith and intercultural understanding. This year’s award winner for Education is Chanda W. Davis, a nationally respected science teacher at Huntsville High School, in Education.

The award for Community Service will be presented to the Rev. Frank Broyles, who has been active in interfaith and diversity ministry in Huntsville his entire career.

The award for Media will be presented to Kay Campbell, who has been religion reporter for The Huntsville Times since 2005.

Professor Ashton, speaking from his office at Tougaloo College in Jackson, Miss., said that interfaith dialogue has become increasingly common in the U.S., particularly in the years since 9/11.

“A lot of interfaith work was forged during the Civil Rights era, but a lot of that generation has passed on,” Ashton said. “Now those conversations are widening to include Hindus, Buddhists, Sikhs – and Muslims are the ones, in many communities, who are really leading the way.”

“As a Christian, I see places for common ground among faiths,” Ashton said.

The Peace Valley Foundation, which won the 2012 Jeffrey L. Ballon Interfaith Award from Huntsville’s Interfaith Mission Service, is a branch of Istanbul Center Alabama and affiliated with the global humanitarian work of Fethullah Gulen. Gulen is an Islamic thinker who encourages Muslims, as an expression of their faith, to take the lead in making their communities friendlier and more peaceful.