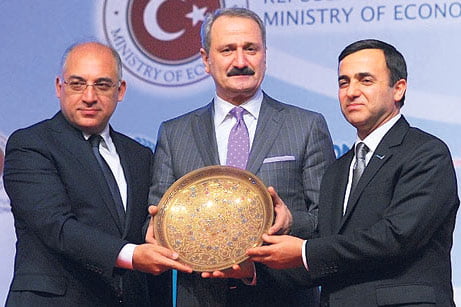 In an opening ceremony that was broadcast in seven languages, Turkish officials and businesspeople acknowledged the importance of building ties with partners in developing markets at the Turkey-World Trade Bridge summit on Wednesday.

“The axis of the world has shifted, and is turning toward the developing world,” said Turkish Economy Minister Zafer Cağlayan in his opening remarks at the textile-oriented trade summit, which saw over 2,000 members of the business community from around the world meet in İstanbul. Developing markets in Central and Southeast Asia, Africa and the Middle East will be Turkey’s key export markets in the coming years, Cağlayan said, challenging Turkey and “the rest of the world not to see Africa and other developing regions as simply places to extract natural resources, but as what they are — markets and people in which we can invest.”

Turkish Exporters Union (TİM) President Mehmet Büyükekşi echoed that sentiment in his own opening remarks, declaring that Turkish businesses would have to increase participation in emerging markets if the country is to expand on the $153 billion in goods Turkey exported this year. “We meet at a time when the world outlook is extremely pessimistic, especially in developed countries,” he said, telling Today’s Zaman that his message for textile manufacturers at the conference would be to “diversify, diversify, diversify.”

The summit, organized by the Turkish Confederation of Businessmen and Industrialists (TUSKON) and the Turkish Exporters Union, focused on the world textile industry, a key Turkish industry which, by Cağlayan’s estimate, makes up 17 percent of Turkish manufacturing and uses up an incredible 26 percent of the country’s labor pool.

Turkish textile and ready-to-wear producers acknowledged on Wednesday that a slowdown in Turkish domestic demand has added extra incentive to go abroad. “Though we’re optimistic about the coming years, on the whole Turkey is seeing a gradual slowdown in demand growth this year,” said Cüneyt Yavuz, general manager of Mavi Jeans. Arkun Durmaz, an exporter at one booth in the sprawling convention hall, said that the slowdown has made her “worry as a producer about being only in Turkey. Hopefully our higher quality products will attract attention today.”

According to a report by the Economy Ministry this year, Turkish public consumption growth is slated to be just under 4 percent in 2012, a number far below growth levels over the past decade. “Companies seeking double digit growth are going to be interested in overseas markets,” said Yavuz.

Delegates representing dozens of developing nations said they would seek partners in Turkey as the reputation of Turkish textiles grows and their own countries’ domestic demand increases. “This is the only kind of meeting in the region,” said Daniyar Saliyev, a retailer from Kyrgyzstan. “There are plenty of opportunities here to make good contacts and strike a deal.” Saliyev owns several retail stores in Kyrgyzstan’s capital of Bishkek.

Other retailers from Nigeria, Sierra Leone, Rwanda and Uzbekistan expressed similar interest, looking for wholesalers of ready-to-wear clothes. “Why Turkey over China? It’s mostly shipping,” said one delegate from Uzbekistan. Charles Onolememen, a delegate from Nigeria, said he was looking for raw textiles as he planned the opening of his own ready-to-wear operation in Lagos. The African Development Bank (ADB) clocked a 6.5 percent growth rate for Nigeria in the third quarter of 2012, a number Onolememen shared as he added that “Africa is full of opportunities, the story has changed, we’re open to do business with the world.”

As evidenced by the findings I briefly described, there is a great contradiction. Those who criticize Gülen argue that he is a pro-Shariah Muslim, but he is also a hidden cardinal, extreme nationalist or an agent at the same time.