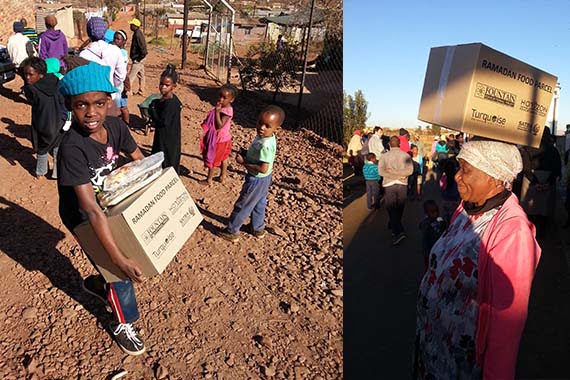 A total of 250 packages of supplies were delivered to those in need under the supervision of the Turkish school teacher Nicholas Bixa’s mother.

In his statements to Cihan News, Bixa -who gained reputation as “Nicholas from Diyarbakir” during Turkish Language Olympics- “Now, we’re in my neighborhood in Tokoza. My mother and two sisters are living here. My mother in person visited 250 houses one by one. And we’ve been delivering the aid for a while. Everyone is greatly happy. May God be pleased with you. In packages are corn flour that the famous South African food “papa” is made from, oil, rice, pasta, hazel nut paste and sugar. And beans for kids.”

Khangelani Mhaleni -who had drawn loud applause to his words; “Don’t be scared. I’m one of you” when he walked on the stage in his traditional African attire and pretended to scare the audience at the 2008 Turkish Language Olympics- also contributed to distribution of aid. Having graduated from Canakkale (a province in Turkey) 18th March University, Mhaleni started teaching at the local Turkish school in South Africa. “I studied in Turkey for four years. And now I’m back in my country. As you can see, we’ve been distributing Ramadan aid in cooperation with Kimse Yok Mu. It’s such a beautiful atmosphere. The people are delighted by the aid and so are we to be involved in it. Many thanks to our brothers in Turkey and KYM. We’re so grateful” Mhaleni said.

Children were too overjoyed by candy and balloon treats distributed as a part of the aid under the auspices of Johannesburg Horizon Turkish School.

In addition to the aid packages for tin house neighborhoods, some five hundred locals are being hosted daily at iftar dinners at ground level halls of Nizamiye Mosque (a replica of Selimiye Mosque in Edirne, Turkey). Breaking their fast with the Indian food biryani, soup and samosa, iftar participants break up following evening prayer. Turkish and local imams are alternately leading the tarawih (the additional congregational prayer specific to Ramadan) with Qur’an recitation.