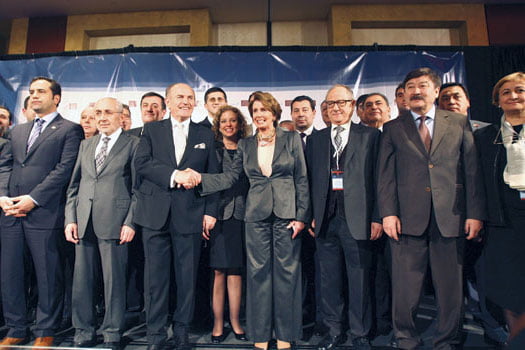 Dozens of members of the United States Congress have reaffirmed strong ties and growing friendship between Turks and Americans in an annual grand convention that also brought together businessmen and public figures.

Organized by the Turkic American Alliance (TAA) and the Turkish Confederation of Businessmen and Industrialists (TUSKON), which represents six regional federations and over 200 community associations, cultural centers, business associations and educational institutions in the US, the closing gala of the third annual Turkic American Convention in Washington, D.C., hosted more than 700 people, including around 50 members of Congress, eight of whom were senators.

Many politicians, academics and businessmen from the US, Turkey and the Turkic republics gathered at the closing ceremony. US House of Representatives Minority Leader Nancy Pelosi; Turkish Ambassador to the US Namık Tan, the ambassadors of the Turkic republics, Justice and Development Party (AK Party) Deputy Chairman Ekrem Erdem, main opposition Republican People’s Party (CHP) Deputy Chairman Bülent Tezcan, 13 other Turkish deputies, members of parliament from the Turkic republics, Trabzon Governor Recep Kızılcık, İstanbul Mayor Kadir Topbaş and Antalya Mayor Mustafa Akaydın were among the participants.

Tan thanked the TAA for organizing such an event and hailed its “noteworthy success.” Tan said Turkey’s relations with the US are based on three principles: mutual trust, unity of vision and close and effective cooperation. Tan said both countries trust each other, adding that the troops of both countries have fought together in countries like South Korea, Afghanistan and Somalia.

Tan also noted that Ankara and Washington share a common vision to promote peace, democracy, freedom and prosperity and that the two NATO members have strong, vibrant and functioning market economies.

Tan said the US and Turkey are working together on a range of issues, from the fight against terrorism to preventing the spread of nuclear weapons.

The ambassador said the administrations of both countries have developed a sincere, effective and results-focused dialogue on both the political and administrative level and added that US Secretary of State John Kerry’s first visit to a Muslim-majority country was to Turkey.

Tan commented that high-level meetings between Turkey and the US will continue in the upcoming months both in Washington and in Ankara.

In terms of Turkey’s integration with the rest of the world, Dr. Bülent Keneş, the editor-in-chief of Today’s Zaman, pointed out the impact of the Gülen Movement. “The role played by the Hizmet movement, which takes its inspiration from the ideas of Turkish-Islamic scholar Fethullah Gülen and has led to Turkey’s active presence in more than 150 different countries around the world — notably in the areas of education and cultural activities — cannot be denied,” Keneş commented.

In their remarks, Topbaş invited the participants to visit İstanbul, while Kızılcık expressed his gratitude to the organization.

Congress members stressed the strong ties between Turkey, the Turkic republics and Washington in their speeches and urged the parties to advance relations further.

Senator Bob Casey said relations between Turkey and the US have never been so strong and that he was very pleased when he visited Turkey in 2009. Casey added that he will go back to Turkey this year and visit İstanbul and Ankara again.

House of Representatives member Jim Moran underlined the necessity for a free trade agreement between Turkey and the US.

Responding to questions from reporters, Representative Sheila Jackson Lee from Texas said there are powerful bonds between the Turkish community in Texas and Turkey and congratulated them for organizing such an event.

Noting that the Turkish community in Texas is very active, Lee said it is important to increase cultural exchanges between the two countries.

Democrat Representative Rush Holt of New Jersey said he is pleased to see that the TAA is growing bigger every year. Saying that Turkey has an important role as a mediator for peace in international politics, Holt noted that Turkey is a significant partner for the US in solving problems in the region. He added that Turkey will have great contributions to offer Washington for its policies in Turkey’s region.

Speaking about Syria, Holt said Turkey is taking on an important burden and he said he wants to see the violence end in Turkey’s neighbor to the south. Recalling the dire consequences of the Iraq war, Holt said the aim was to topple a dictator in Iraq, but everyone witnessed how difficult it is to do that from afar.

New York Representative Charlie Dent said he was proud to be at the event and he was very impressed during his visit to Turkey. He underlined the need to improve trade relations between Turkey and the US.

Dent, who visited Gaziantep recently, said there is only 100 kilometers between Gaziantep and Syria and that Turkey needs US help dealing with the violence in Syria.

“We are concerned about Turkey regarding Syria,” Dent added.

Representative Leonard Lance, also of New Jersey, said the Turkish community in his constituency is “very important” and that he is happy to be among the event participants.

California Representative Dana Rohrabacher said the Turkish community had previously been very quiet and he was not sure why that was the case. “But they are now coming out to express their opinions, say who they are. We are pleased to see they are active,” he added. Rohrabacher also agreed that the US is located very far from Syria and said Washington should be staying out of the crisis in Syria. “But I’m happy to see that Turkey is involved in this issue and Turkey’s engagement gives hope that the crisis in Syria will be concluded well. We have to let local and regional countries lead in these kind of matters,” Rohrabacher added.

US Assistant Secretary of State for South and Central Asian Affairs Robert Blake said the TAA is contributing a lot to improving US relations not just with Turkey but also other Turkic republics.

Mississippi Senator Roger Wicker said he is excited to be among the participants, recalling the nation’s 20-year friendship with the Turkic republics. He added that Washington is working with those republics to improve national security, economic and democratic reforms. “We attach importance to events like this. We are hopeful for democratization in the entire world now that the Cold War has ended. This type of event plays an important role in the process, and I thank the TAA for organizing it,” Wicker stated.

Congratulating the TAA for its works, Erdem said this unity will not only be reflected in important works between Turkey and the US but also with other Turkic republics.

Connecticut Senator Chris Murphy said he appreciates the activities of Turks in his constituency and welcomed the growing scope of the TAA convention.

Texas Representative Henry Cuellar thanked the Turkish community in the US for helping campaign to re-elect US President Barack Obama.

Illinois Representative Bill Foster said Washington’s cooperation with the countries of the region is very important for world security and that there are many issues to work on with respect to Afghanistan. “We have to keep working together,” he added.

North Carolina Representative David Price said in his speech that the TAA’s program is becoming more impressive every year.

Richard Lui from MSNBC was the emcee of the gala.

The 10th annual Intercultural Dialogue and FriendshipRamadan Dinner celebrated the ninth month of the lunar Islamic calendar on Wednesday and Thursday nights in Bethlehem. The event was free and open to the public. Other organizers and sponsors of the event were Peace Islands Institute, Turkish Cultural Center Pennsylvania and the City of Bethlehem.

Since 2016, the Turkish Food Festival has brought a variety of Turkish dishes and cultural activities to Greenville. This year, though, due to the coronavirus pandemic, the festival will be serving food in a drive-thru at the Phillis Wheatley Center.