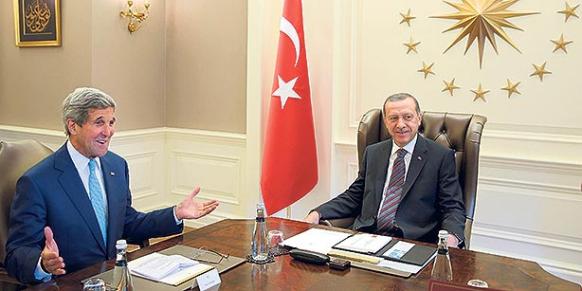 In a letter to Kerry, 89 members of Congress stated that they are “deeply concerned” with the recent arrest of journalists, underlining the Turkish government’s steps to “intimidate, arrest and smother” critical voices as being a threat to the very democratic principles that Turkey claims to respect.

The congressional members mentioned a Dec. 14 operation that targeted the managers of the Zaman and Samanyolu media outlets, saying the charges faced by Zaman Editor-in-Chief Ekrem Dumanlı and Samanyolu TV General Manager Hidayet Karaca are “questionable.”

On Dec. 14 of last year, Karaca was detained as part of a police operation that also targeted Dumanlı, police officers, scriptwriters, producers and directors on charges of heading a terrorist group based on a TV series that was broadcast years ago on Samanyolu. The İstanbul 1st Criminal Court of Peace ruled on Dec. 19, 2014 for the arrest of Karaca and three former police officers.

The US politicians also listed concerns with the blocking of scores of tweets from Turkish journalists and media outlets after a complaint was filed by a judge over a news story shared through the social media platform. It said some 400 people were monitored on Twitter and “ultimately Turkish access to the social media [site] was blocked.”

Underlining the Turkish government’s earlier attempts to silence opposition voices, the members of Congress said that “recent arrests have had a chilling effect on freedom, democracy, and economic prosperity for all of Turkey.”

“… we strongly urge you to reach out to President [Recep Tayyip] Erdoğan and his administration to encourage a peaceful and appropriate resolution to these cases. A free media must be supported and protected to foster an environment open to constructive political discussion and to ensure freedom of expression for all the Turkish people,” the Congress members said in the letter to Kerry.

Stressing that Turkey is a strategic ally to the US in the Middle East and a key member of NATO, the politicians expressed hope to see the Turkish government “abandon this course of intimidation and embrace a free press and tolerance of dissenting voices.”

“It is our priority to encourage the Turkish government to fulfill the responsibilities and obligations to their own people,” they said.
Republican Rep. Matt Salmon of Arizona, Democratic Rep. Emanuel Cleaver II of Missouri, Democratic Rep. Ted Lieu of California and Democratic Rep. Alan Grayson of Florida are also among the many signatories of the letter.

In addition, US-based watchdog Freedom House has stated that Turkey has drifted further from democratic reforms, with former Prime Minister Erdoğan rising to the presidency and overseeing government attempts to quash corruption cases against his allies and associates as well as greater interference in the media and judiciary.

Releasing its annual “Freedom in the World 2015” report on Jan. 28, Freedom House, which describes itself as “an independent watchdog organization dedicated to the expansion of freedom around the world,” heavily criticized the anti-democratic developments in Turkey.

The report, in its section on Europe, stated that in Turkey, Erdoğan “consolidated power during the year and waged an increasingly aggressive campaign against democratic pluralism.”

“He openly demanded that media owners censor coverage or fire critical journalists, told the Constitutional Court he does not respect its rulings, threatened reporters (and rebuked women journalists) and ordered radical, even bizarre changes to the school curriculum. Having risen from the premiership to the presidency in August, he formed a ‘shadow cabinet’ that allows him to run the country from the presidential palace, circumventing constitutional rules and the ministries of his own party’s government,” the report stated.

Erdoğan’s remarks from March 2014 about Twitter were highlighted in the report, in a section titled “Democracy’s opponents,” with a picture of Erdoğan next to it. “We’ll eradicate Twitter. Everyone will witness the power of the Turkish state,” Erdoğan had said in March.

Turkey was listed as a “partly free” country in the report in terms of freedoms in the world and received a rating of 3.5 — 1 being the worst and 7 being the best. Turkey received a 4 in terms of civil liberties and a 3 on political rights. Turkey received a downward trend arrow in the report as well, due to “more pronounced political interference in anticorruption mechanisms and judicial processes, and greater tensions between majority Sunni Muslims and minority Alevis.”

In terms of press freedoms, Turkey was already among the “not free” countries in the most recent press freedom report, which Freedom House released last year. This year’s report also highlighted Erdoğan’s intensified campaign against media freedom and civil society as evidence of growing disdain for democratic standards in the world, along with Egyptian President Abdel Fattah al-Sisi’s rollback of democratic gains and Russian President Vladimir Putin’s invasion of Ukraine.