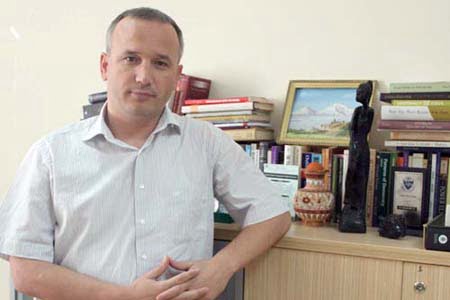 When faced with the complicated case called ” the Armenian issue” the conservatives (pious Turkish people), inevitably take the position of preserving their history, culture and identity.

Even the thought of an Ottoman massacre, lead them to a knee jerk reaction, as it contradicts with everything the conservative intellect is built upon. But the conservatives cannot see some of the most important problems of the ”Armenian issue” because of this knee jerk reaction. Although they believe that they’re defending their identity and history, just on contrary they’re defending a minority, which fought with this history and identity. So the conservative intellect better think about the fundamentals of the issue. Because the conservatives, who think they are advocating their history, are in a way advocating a political group that led to death of thousands of people, sabotaged the Ottoman peace and created a racist heritage because of their unrealistic and racist approach. Conservative intellect must urgently analyze the ”Armenian issue” again and separate the actors of it.

Firstly, the rulers at the time of the issue were a group called Committee of Union and Progress (CUP), who seized power by a coup d’etat. So one must understand that it is nonsense to accuse “Turks” or “Ottomans” because of the wrongdoings of the “CUP.” The Union and Progress absolutely does not represent the idea on which Ottoman State is built upon. They seized power through a coup d’etat. During the coup d’etat they have murdered the minister of defense and Enver Pasha, who led to death of thousands of people in Sarikamis, forced the prime minister to resign by pointing a gun at him. Actually the CUP represent the historical fracture that ended the peaceful atmosphere between so many races living under the Ottoman rule. Most members of the CUP were either overtly nationalist or racist. In a way, they ended the peace on the Ottoman geography. So it was impossible for the members of the CUP to understand and rescue the Ottoman peace. Years later, Mahmut Esat Bozkurt, one of the advocates of this mindset, called Turks the masters of the geography. Members of the CUP saw excessive force as the answer to solve the problems of people from other races.

View of Ottoman’s enemies on the issue

So the first thing the conservatives need to do is separating the history on their minds. Yakup Cemil, Enver Pasha, Talat Pasha, Kara Cemal and Cemal Pasha do not represent the mindset of Ottomans as they have led the country to a chaotic environment by the means of violence. Also these people would not have qualified as Ottoman administrators as they lacked the needed education and vision. So it is nonsense to compare these people with the likes of real Ottoman administrators. We can understand this as the the CUP’s practices were really similar to those of who were behind the coup d’etat of May 27 1960 who executed a prime minister and September 12 1980 whose brutal practices at Diyarbakir jail were quite similar to the Cemal Pasha’s at Arab cities. Thus, conservatives must rethink on this issue and understand the difference between Ottomans and the CUP members. They should also avoid defending the massacres of U&P although involuntarily. Secondly, other crucial questions about the issue today are how come the people, who reject the Ottoman heritage at every chance, become pro-Ottomans on the Armenian issue although they are the fiercest anti-Ottomans and why do they pretend to be pro-Ottomans on the Armenian issue? Is it because they fear shedding light on the Armenian issue will make a domino-like effect and it will also shed light on other horrible practices happened with Kurds and Arabs? Is this why they are trying to misguide us on the issue? Maybe it’s because seeing the real reason behind the issue will also lead to resolutions on some other dark cases. Who is trying to avoid us finding the real reasons behind all this?

Who is profiting from the Armenian Issue?

Thirdly, without a doubt, the Armenian issue includes huge tragedies like deportation and death. So naturally human life is more important than all the debates. But we should also ask about the political-economy of this issue that is related to hundred thousands of people. Who owns now the houses and lands of Armenians who lived with us for centuries? So are those making a big fuss about the issue actually trying to hide the political economy behind it? Shouldn’t we ask questions about the owners of these lands? Who shared these lands? We know that conservative people did not redistribute the this wealth those days, so who were they? Which luxurious hotels are on the same place where there were Armenian cemeteries for centuries?

When we look closely, we see that the real reasons behind these issues, on which some particular people make a big fuss about, are actually pretty simple. For instance, we witnessed at the February 28 post-modern military coup that the slogan “state, republic and secularism are being lost” was actually a way to deceive people. We later found out that it was all about the profits of some people. We should approach the Armenian issue in the same way.

This debate can be extended. But it is clear that conservatives should approach this overtly patriotic discourse on the issue suspiciously. Over the years, conservatives’ qualities like patriotism, notion of martyrdom and obedience to state are being exploited. One cannot and mustn’t be tolerant towards approaches like this. But, first the conservatives themselves should be suspicious. Because justice is personal and absolute justice cannot be an indirect reflection of political projection and social purpose. Conservatives, who feed on Islam’s absolute and unique principles of justice, need to remember some of these principles when analyzing the Armenian issue. Islam demands absolute justice and its practice when circumstances are all convenient. So conservatives should see who are taking advantage of the Armenian issue.