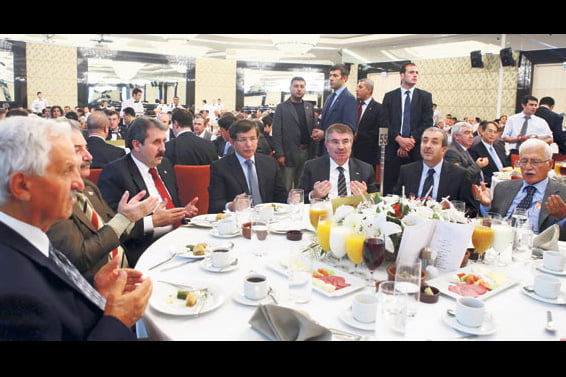 Many prominent figures came together around the same iftar (fast-breaking dinner) table on Thursday night in an event held by the Ankara branch of the Journalists and Writers Foundation (GYV).

Many distinguished figures, including cabinet members, politicians, diplomats, businessmen and journalists, came together at the same iftar (fast-breaking dinner) table on Thursday night in an event held by the Ankara branch of the Journalists and Writers Foundation (GYV).

The recent surge in terrorist attacks, which have claimed the lives of dozens of soldiers, made a somber impact on the dinner, during which government ministers vowed that Turkey will prevail over terrorism, and that no one will have reason to doubt the resolve of the Turkish government. While thanking to the GYV for organizing the iftar dinner, Interior Minister İdris Naim Şahin also said that Turkey will solve its terrorism problem before next Ramadan. Şahin noted that Turkey, which is becoming a stronger force in its region every day, is attracting the attention of the world. He added that the recent terrorist attacks aim to undermine Turkey’s success.

Saying that the government knows who is behind the recent escalation in Kurdistan Workers’ Party (PKK) attacks, Şahin added that terrorism will never reach its goals. “I hope we can talk about a different Turkey next Ramadan. We are determined to solve this problem. We believe that next year, we will have a peaceful Ramadan from Hakkari to Edirne. We pray to Allah to stop the violence, terror, tears and bloodshed. On the other hand we are aware of our responsibilities,” he said.

Also speaking at the event, Foreign Affairs Minister Ahmet Davutoğlu condemned Wednesday’s treacherous attack in Hakkari. Davutoğlu pointed out that these aim of these attacks is to make Turkey concentrate on only one issue. “Those who are responsible for this event will be held accountable for their actions. However, we cannot say that while we are struggling with terrorism, we will stop trying to help Somalia. This is what terrorist organizations want. Until a few years ago, Turkey’s agenda was taken up with military interventions, earthquakes and terrorist attacks. Now, it is known for its economic success, democratic initiatives and successful foreign policy. No one should believe that terrorists will achieve their goals with these kinds of attacks.”

Acknowledging that this is a time of sorrow for Turkey, Davutoğlu added: “We are mourning for our martyrs. We will settle our account with those who caused this pain. We will not be demoralized or allow them to undermine Turkey’s ambitious goals. Our martyrs’ trust and faith in this country will be preserved.” Pointing to developments in Libya and Syria, Davutoğlu stated that due to sharing a common heritage, Turkey cannot be indifferent to the problems of its sister peoples. Davutoğlu also reiterated his call for Syrian President Bashar al-Assad to cease military operations against domestic opposition in that country.

Food and Agriculture Minister Mehmet Mehdi Eker criticized those countries that are exhibiting indifference to the famine in Somalia, saying that the money people spend on weight loss in wealthy nations could save the lives of a billion people today. Condemning the PKK attack in Çukurca, Hakkari province, GYV Chairman Mustafa Yeşil pointed out that the fight against terrorism should be conducted within the boundaries of justice and the rule of law.

The GYV’s honorary president, Fethullah Gülen sent a message for the evening’s guests. “Ramadan is a time of compassion and mercy. In these blessed days, when patience and tolerance prevail, we once more remember love, peace, modesty, cooperation and living for others,” Gülen’s message said.

Gülen underscored the importance of dialogue and mutual understanding. “We understand the importance of not victimizing anyone by our judgments, and of communicating face-to-face regardless of our ideologies,” he said, adding, “Despite all provocations designed to create polarization, gatherings like this one show that our people have this potential [for peace], and they are of great value to refreshing our hopes for the future.”

The GYV was founded in 1994, and the mission and work of the foundation are inspired by the GYV’s honorary President Gülen, known for his teachings of hizmet (service), tolerance and dialogue.