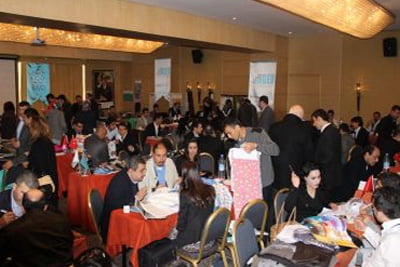 The recent visit by a Turkish business delegation to Morocco has seen companies secure textile deals worth $30 million, the Turkish Confederation of Businessmen and Industrialists (TUSKON) has announced.TUSKON brought 44 members from the textile sector to meet 310 of their Moroccan counterparts at the Turkey-Morocco Textile Business Forum over the weekend.

Gültekin said they were encouraged by the interest shown by Moroccan entrepreneurs in Turkish textiles and ready-to-wear products. While mutual trade between Turkey and Morocco currently stands at $1.3 billion, TÜFİAD Secretary-General Gökmen Ertaş said both sides expect this figure to grow to $3 billion. He said Turkish textiles compete with the relatively cheaper Chinese-made products in Morocco, but that the group is working to boost the popularity of quality Turkish goods in the market.

Huge trade and investment potential exists between Pakistan and Turkey and Dr Muhammad Iqbal University will be established in Lahore with Turkish collaboration. This was stated by Mr Taner Kocyigit, Secretary General Pak-Turk Businessmen Association (PTBA), while addressing members of the Faisalabad Chamber of Commerce and Industry (FCCI) on Monday. Highlighting the objectives of the […]

20 July 2012 / MİNHAC ÇELİK, İSTANBUL President Ali Bongo Ondimba of Gabon has said his country is very satisfied with a school opened by Turkish volunteers there and called on volunteers to open more schools. “We are very satisfied that Turkey opened a school in Gabon. This is very encouraging and needs to be […]

New Delhi: In a bid to give new fillip to trade between India and Turkey, a new chamber for commerce named as the Turkish Indian-Chambers of Commerce and Industry (TICCI) was launched at a well-attended ceremony of business leaders and industrialists here on Tuesday evening. It aims to promote commercial and trade links between both the countries by creating more networking and collaboration opportunities.