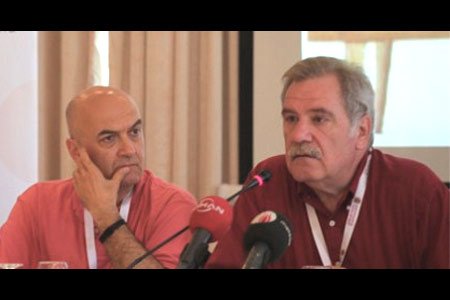 Intellectuals and journalists who gathered at a workshop for a debate on how the media treats non-Muslims in society have said that the media has had a crucial role in imposing official ideology on society.

“It is not that all negative perceptions in the media regarding non-Muslims have been determined by media bosses or chief editors. Everything started with the creation of a nationalist ideology back in the years when the Turkish Republic was established and when the nation-state was being formed,” said sociologist Ayhan Aktar at the two-day workshop, “Perception of non-Muslims in the Media,” on May 12-13 organized by the Medialog Platform of the Journalists and Writers Foundation (GYV).

“The Turkish political system has created factory settings. There is an automatic reflex in the Turkish media in regards to how non-Muslims are going to be treated,” he said, noting as an example the events of Sept. 6-7, 1955, when minorities who were living in İstanbul were forced to leave and the media had a role in the start of the riots.

Even though the Greek population in Turkey was not less than 100,000 in the 1930s, tension between Turkey and Greece has greatly affected their survival in Turkey. Following the İstanbul Riots of 1955 and then with the 1964 deportation of roughly 12,000 ethnic Greeks, the Greek population has been in constant decline in Turkey.

Other minority communities, despite being Turkish citizens, have also been negatively affected by political conflicts in which Turkey has been involved with other countries, and many of them have left Turkey. Turkey’s population of nearly 75 million, mostly Muslims, currently includes about 65,000 Armenian Orthodox Christians, 20,000 Jews, 15,000 Assyrians and about 3,500 Greek Orthodox Christians. According to the last Ottoman population census of 1906, the proportion of non-Muslims among the population was about 20 percent. The first population census of the Turkish Republic in 1927, showed that this ratio had been reduced to 2.5 percent.

Orhan Kemal Cengiz, a human rights lawyer who is also a columnist for the Radikal daily, said that a bottom up approach is best suited in that regard.

“Everybody, every group should be open to self-criticism, which is not widely practiced in Turkish society,” he said.

Syriac Catholics are estimated to number about 5,000 in Turkey. Zeki Basatemir, chairperson of the Syriac Catholic Church Foundation, said at the gathering that the educational system also has an important role in the creation of perceptions.

“Of course, the media plays a significant part, but look at the history books. There are prejudices,” he said. “And if the government talks about the importance of having a ‘single religion’ [Islam], then what we talk about here remains not really meaningful. As we have been getting together for 18 years with support from Fethullah Gülen [the Islamic scholar], there should be no talk about ‘one religion.’ We would like all religions to co-exist in harmony with each other.”

On the second panel on Saturday, Şalom (Shalom) Editor-in-Chief Evo Molinas said that the Jewish community in Turkey is negatively influenced by political tensions between Turkey and Israel.

“Even though we are Turkish citizens, we are treated by some people as if we are defenders of Israel. We are grateful to the Prime Minister Recep Tayyip Erdoğan for his remarks, which were an antidote to anti-Semitism,” he said.

Alper Görmüş, columnist for the Taraf daily, emphasized that “factory settings” are valid for the media in general.

“Left-leaning, nationalist or Muslim, each form of the media follows the line that the state draws,” he said.

He added that television series should take into serious consideration what kind of perceptions they create, not just newspaper stories.

The participants, who were hosted for a lunch on Saturday at the Greek Boys’ High School at Heybeliada (or Halki, one of İstanbul’s Princes’ Islands), worked on Sunday on a final document which included recommendations.

One suggestion in that regard refers to using a different terminology in the media, for example, using “groups belonging to different religions and belief systems,” instead of “non-Muslims.”

Participants also said that displaying bad practices — such as hate speech — in the media would also contribute positively to the society in changing negative perceptions.

On the role of what the minority media can do in that regard, Ohannes Kılıçdağı, an academic and columnist at the Turkish-Armenian weekly Agos, said that news stories that are not included in the mainstream media can find a place in the minority media and increase the awareness of minorities’ problems.

Medialog’s General Secretary Erkam Tufan Aytav stressed the lack of trust between the majority and minorities in dealing with each other and suggested more dialogue and similar workshops.