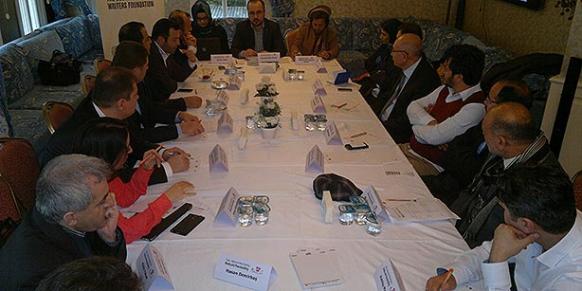 Members of the Afghan media met with colleagues for a workshop titled “Media and Peacebuilding” that was organized by the Medialog Platform of the Journalists and Writers Foundation (GYV). (Photo: Cihan)

Members of the Afghan media met with colleagues for a workshop titled “Media and Peacebuilding” that was organized by the Medialog Platform of the Journalists and Writers Foundation (GYV).

Afghan journalists acknowledged the structural problems in their country, such as limited access to the Internet and television, since about half of households still do not have electricity, but complained that Western media outlets only report on violence such as terrorist attacks and ignore other realities in Afghanistan.

Muhammad Faheem Dasthy, a journalist and a political analyst, argued that peace building through media is impractical because across the world, media outlets promote violence through their coverage.

Dasthy said that car bombs and other acts of terror are a part of their life in Afghanistan, without any doubt, but it is not the overall reality. However, when people look at their region from the Western perspective, all they see is bloodshed. Aral Azizullah joined his colleague in saying that Western media portray a negative image of their country.

A TV journalist from the Moby Group, Massood Sanjer, provided figures about the media atmosphere in Afghanistan. According to the data he provided, 58 percent of households in the country have a TV, but radio remains the main source of news for the nation. Internet penetration is still low, at just 5 percent. According to Sanjer, only 30 percent of Afghan people are “properly literate” referring to those who can understand what they read in a newspaper.

As far as media freedom is concerned, the Afghan journalists agreed that there is relative freedom in their country, despite the existence of government-sponsored media. While Dasthy argued that the media is politicized in Afghanistan and that many media outlets are dependent on political parties, another Afghan journalist Abdullah Khenjani said that compared to the rest of the region, Afghan media outlets are independent. He also argued that complete media independence does not exist anywhere in the world. According to him, independent media outlets such as his TV channel TOLO are the most influential, although no rating system exists in Afghanistan.

Providing a different part of the picture of Afghanistan, Dr. Semiha Topal from Fatih University also presented some findings from her field research on Turkish-Afghan schools and the education of girls in these schools. She noted that due to the fact that they offer a modern education that is compatible with Afghan values in these schools, the family of the former President of Afghanistan, Hamid Karzai, had asked Turkish entrepreneurs to establish a school in his hometown.

The Movement fights against ignorance all around the world, reaches and brings service to people who are forgotten by the governments with their volunteers, and helps enrich their morality with Islam and material worlds with their modern institutions and instruments.