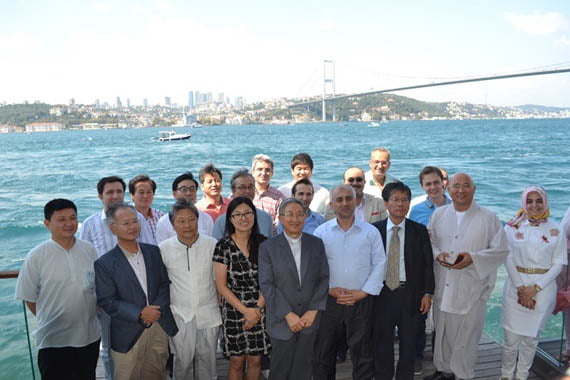 Intercultural Dialogue Platform (KADIP), whose vision is to set up bridges between different cultures and faiths, welcomed religious leaders from Korea in Istanbul.

KADIP and Korean Conference on Religion and Peace (KCPR; an institution that brings together representatives of 7 different faiths) jointly organized a workshop entitled “Turkey-Korea: Peaceful Coexistence” which took place at the headquarters of the Journalists and Writers Foundation (GYV) in Kuzguncuk/Istanbul.

The largest participation to the workshop was by academicians from the area of history of religions, but was not restricted to it; indeed, the event attracted attention of representatives of diverse social strata. GYV President Mustafa Yeşil delivered the opening speech of the program which concentrated on such issues as experiences of coexistence, culture and religion in social life, the richness of diversity and universal values.

Broaching the subject of universal human values in his opening speech GYV President Yeşil said: “There exist three main sources of universal human values emphasized also by esteemed Fethullah Gülen. There are values that are derived from religions, values derived from traditions and values derived from scientific studies. One of the reasons why the problems of today cannot be resolved is poor moral values. I hope that in today’s world believers will contribute to the resolution of social problems through addressing the subject of values”.

No Opposite but Neighbor Religions in Korea

KCRP President Kim Hee Joong expressed his opinion that differences and diversity mean beauty and richness; “It is flowers of various colors and diverse plants that make a garden beautiful,” he explained. “In Korea there are more than 50 religions, more than 600 religious orders and communities. And the secret to our peaceful coexistence is mutual respect. In Korea a religion different from yours is not referred to as an ‘opposite religion’, but as a ‘neighbor religion’,” he said, emphasizing that the mission and tasks of religious leaders and intellectuals are of great importance. “The human values that esteemed Mr Gülen talks about must be well understood and respected,” he added.

During the experience-sharing section journalist Hrant Topakian shared his ideas on the necessity for such values as dialogue, understanding and mutual respect, and clarified his position by providing examples of family arguments he had been through. He confessed that what he saw within the Gülen community when first introduced to it was room for the application of both feeling and thought – something he had longed for during many years. Topakian said that the problematic period Turkey is going through has harmed not only minorities, but Muslim groups, too; “Attempts of the past 15 years at establishing dialogue have provided the ground for people from different nations and religions to understand and respect each other,” he added.

KCRP Secretary-General Dr. Byun Jin Heung, talking about the process of establishing interfaith dialogue in Korea, noted that activities aiming at reaching this goal began after 1965 and were institutionalized after 1986. He explained that the current institution brings together representatives of Buddhist, Protestant, Catolic and local faiths, and realizes activities that help one understand other religions. Mr Heung put an emphasis on ensuring “dialogue in the process of resolving social problems of religious basis” as, according to him, it is the foremost function of the organization.

Opinion and experince sharing was followed by an exchange of gifts; the end of the event was marked by all the participants from both KADIP and KCPR posing for a collective photograph.