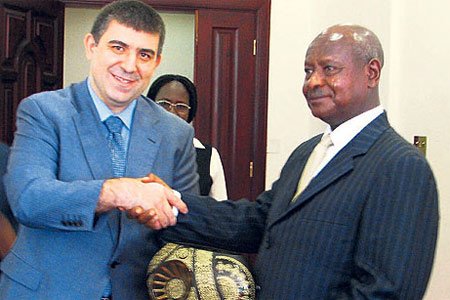 Uganda President Yoweri Kaguta Museveni has praised Turkey’s flourishing African policy and its recently keen interest in African countries, pointing out its positive implications on developing relations between Turkey and the continent. “Turkey was a great power during the Ottoman Empire, which declined after World War I. Although Mustafa Kemal Atatürk came to modernize Turkey, Turkey is now a modern country.

We are very happy to walk with [Turkey] and welcome the interest [of Turkey] in Africa,” said Museveni on Friday during a bilateral meeting with Turkish businesspeople in the capital of Kampala, pointing to the Turkey-Africa summit held between Aug. 18-21, 2008, in İstanbul with the participation of representatives from fifty African countries. “By organizing this conference Turkey showed its interest in Africa,” said Museveni, adding that African countries welcome Turkey’s outreach to the continent.

Museveni received Turkish businesspeople — headed by the Turkish Confederation of Businessmen and Industrialists (TUSKON) — on Friday at his presidential residence located in Kampala, which concluded with a joint commitment to further improve economic relations and extend business investments between the countries.

During the meeting he urged Turkey’s businesspeople to use the rich business opportunities of Uganda and to invest in the local production fields of the country.

“We have minerals, including gold, copper, cobalt and petroleum; we have mining resources, tourism. And you have comprehensive entrepreneurship and capital that need to be merged to achieve success in Uganda; therefore we are waiting for you,” said Museveni.

Welcoming Turkish businesspeople in his country he said, “As the Turkish economy is growing, it is very good to see Turkish enterprises willing to locate in Uganda, which will help both sides derive benefits. You are more than welcome.” He said that Turkey and Uganda could complement each other given the uniqueness of Uganda in the region. “Uganda is located at the crossroads in the center of Africa, which is a rising power among the countries of the continent. Planes transit [Uganda], flying to various places in Africa, as we are in the middle, so when you invest in Uganda, you will invest in all these areas on the continent,” said Museveni, urging Turkish businesspeople to be active and to assess the raw material of Uganda.

During a speech on Turkey’s rising economy and the revival of Turkey’s relation with Africa, Mustafa Günay, the head of TUSKON, called Uganda a rising power and hub country in the midst of Africa, praising it as “a pearl of Africa.” “We believe in the future of Uganda given the large number of business opportunities in the country, so we are trying to convince people to come to Uganda and see its beauty,” said Günay.

Pointing out that some Turkish companies’ have already started small businesses in Uganda, Günay said it is not enough given the rich resources of Uganda. “We need to have success stories. We need to do much bigger projects,” said Günay, adding that Turkish businessmen are waiting for the willingness and agreement of the Uganda nation and its government.