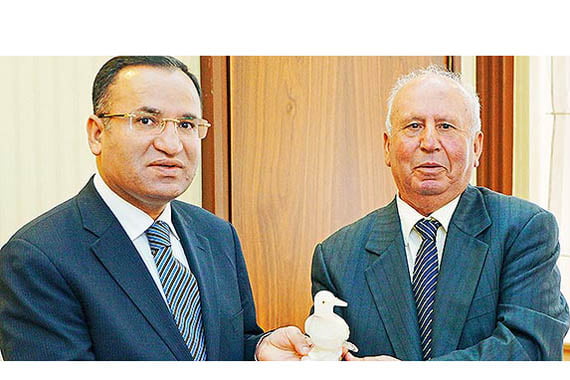 The first joint mosque-cemevi (Alevi house of worship) project in Turkey will be financed by businessmen from both parties, the head of the Hacı Bektaş Veli Culture, Education, Health and Research Foundation, Kemal Kaya, said on Thursday.

The idea for such a project, which aims to strengthen will of peaceful coexistence, came from Islamic scholar Fethullah Gülen who is known for his efforts to promote peace and dialogue. Referring to Gülen as the father of the idea, Kaya says that they were in a way encouraged by Gülen to initiate such a project but denied rumors that the project would be financed by Gülen himself. “The project will be financed by Alevi and Sunni businessmen,” Kaya stated. Construction on the project in Ankara will begin on Sunday.

The project is widely supported by Alevi religious figures (dede). İsmail Eker, the head of the dede council in the Ankara Branch of the CEM Foundation, said those who are against this project might call themselves Alevis but they fall outside of the definition of Alevism. Eker also dismissed claims that there is an intention to assimilate Alevis [into the Sunni faith]. “I have no doubt about my own faith; no one should have any doubts. We want people to go wherever they want, to either the mosque or the cemevi.” Referring to the big meeting area planned in between the mosque and the cemevi in the project, Eker said that people can socialize and get to know each other better following their prayers in the complex.

Eker also warned of possible acts of provocation during the upcoming ceremony to break ground on the project on Sunday, urging people to be careful and the security forces to take the necessary precautions. He also asked the police not to spray anyone with pepper gas should there be a protest at the ceremony area.

Another dede, Celal Abbas Bektaşoğlu, stated that their goal was constructive and described those who are against the project as fanatics. “I wonder whether those people have ever been to a cemevi in their life,” he said, commenting on the opponents of the joint mosque-cemevi project. “In the Quran, believers are considered brothers and sisters. Why should they be uncomfortable with that?” Bektaşoğlu asked.

Providing examples from his personal life, he said he has had a Sunni business partner for the last 12 years, adding that the opponents’ concern is not about the mosque or the cemevi. “Among them are people pretending to be Alevis,” Bektaşoğlu said.

Marxist Leninist Alevis are against the project a dede argues

According to dede Baki Özdemir, those who are uncomfortable with the collaboration between Alevis and Sunnis are Alevis who are heavily influenced by Marxism and Leninism. He also argued that the Alevi opening project which was initiated by the government in the previous years was not going well and that nothing had been accomplished. Consequently, he believes that if such a task was assumed by civil society, this would bring about better results.

Representatives of Alevi organizations will hold a press conference in Ankara on Friday to talk about the details of the project which aims to promote the idea of “accepting others as they are.”

Meanwhile, Deputy Prime Minister Bekir Bozdağ, who was attacked by an Alevi citizen during the commemoration of Alevi thinker Hacı Bektaş Veli last month, said on Thursday that the punch against him also targeted Hacı Bektaş Veli.

Receiving a delegation from the Hacı Bektaş Veli Association in Ankara, Bozdağ said the attack on him disrespected the philosophy of the Alevi thinker.