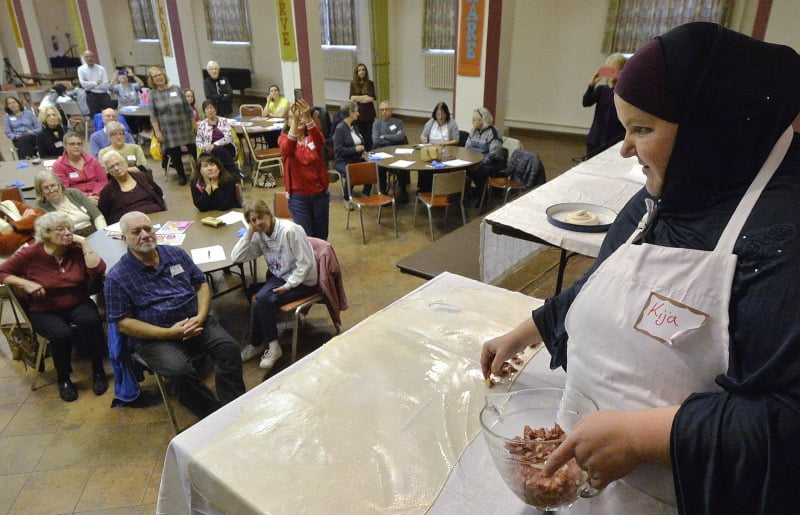 The newsroom phone simply rang and I picked it up. It was a woman, Gloria Knox, of the First Presbyterian Church of the Covenant, who was hoping we could put something in the events calendar. Happens all the time.

She was telling me about the event and I was about to explain that she needed to send something in writing and we’d be happy to put it in the appropriate calendars of events. Then she caught my ear: Turkish cooking class … at a Presbyterian church … as a fundraiser for Puerto Rico? Wait, wait, wait, wait.

This was food column gold, pouring out of my phone. The people at the Erie Turkish Cultural Center and the church have a good relationship built on local geography — the church is in the middle of Gannon University’s campus and many Turkish students study there and attend church functions designed for students, such as study nights and weekly, inexpensive dinners.

For this particular event, the cultural center’s executive director, Bunyamin Aysan, said he needed a venue for the fundraiser he wanted to host — because seven ago, Americans had sent money to help Turkey after a devastating earthquake there.

“Nine people died in my village,” Aysan said. “We understand what people in Puerto Rico are going through with no water, no eating, no transportation, anything. It doesn’t matter how far away from us they are. We can do it together and show God’s universal power.”

So, they asked the church if they could use its busy Knox Hall to stage the cooking class and full-blown Turkish dinner, including salad, warm, soft Middle Eastern bread, a cold mushroom dish, shaved meat and a meat-and-potatoes stew that could warm the heart and soul.

But first, three delightful Turkish women would show us how they make three other traditional dishes, recipes follow.

1. The Bosnian Borek was nothing short of sorcery, and round and cheerful Kija Kantarevic, 40, reveled in the attention she got when she rolled and rested and stretched and rolled and rested and stretched a cantaloupe-sized ball of dough into a 2-by-3-foot sheet you could see her hand through. She invited three American women up on stage to help her stretch it and told them not to worry if they tore a hole in the dough.

She used a straight, round wooden roller, at least 2 feet long. When asked where she got it, she looked up and smiled. “Home Depot,” she said, and 60 people laughed.

2. Borek is a meat mixture wrapped in a few very thin layers of dough and baked. She used only a mixture of beef, onions, sweet paprika salt and pepper in her demonstration, but said everyone in her family likes their borek filling differently. Her daughter likes feta cheese, her son likes spinach, her husband likes chopped meat instead of ground. She said others might use pork or lamb, but she prefers ground beef.

Also, she added, some like to cook the mixture before wrapping it in the dough and baking the Borek, but she said she thinks it’s more flavorful to let it all cook together.

I want to make Borek immediately. She has a shallow, rough baking dish that fits her whole batch perfectly. I’m not sure what pan I’d use, but I think I’d try to just put it on a baking sheet.

As to why it’s “Bosnian,” she said that the Turks were in Bosnia for hundreds of years, and she’s from Bosnia but considers herself Turkish. So, there you are.

3. The Sekerpare (Turkish Semolina Cookies in Syrup) were fall-apart delicious, and I’m a sucker for anything sweet, wet and lemony. The woman who made them said you stop adding flour to the dough when it feels “soft like an earlobe.” She said the name in Turkish means, literally, “piece of delight,” or “piece of heaven.”

Both women who worked with dough kneaded it using their hands to know if it was ready. Kantarevic tried to start with gloves on but removed them almost immediately. “I have to feel the dough,” she said.

When Nejar was making the cookie dough, she mixes it with one hand, somehow keeping one hand clean and dry. “When I touch the dough with my clean hand, and it doesn’t stick, it’s ready,” she said.

4. The cookies call for semolina flour, which is readily available in the bigger grocery stores. It’s coarse, made from hard durum wheat, and has a little bit of a sweet flavor and offers a cake-like texture. At the dinner, they were saying you could use cream of wheat, but I think that would take about the same amount of effort as finding semolina.

5. What to say about the Yayla Soup? The woman called it a Turkish “comfort food,” and said it’s something you might be served in a hospital or by your mother if you weren’t feeling well. I’ll call it an acquired taste, and I ate it and acquired it in a fashion — but it was way out of my comfort zone.

But of course, that was the point of the whole experience.

Jennie Geisler writes about her adventures as a home cook every Wednesday. You can reach her at 870-1885. Send email to[email protected]. Follow her on Twitter at twitter.com/@ETNgeisler.

Click below link to find recipes for the food mentioned in the story.

The Punjab Welfare Trust for Disabled (PWTD) and a Turkish Non-government Organisation (NGO) KIMSE YOK MU on Wednesday signed a memorandum of understanding (MoU) for making joint efforts for elimination of cataract disease.