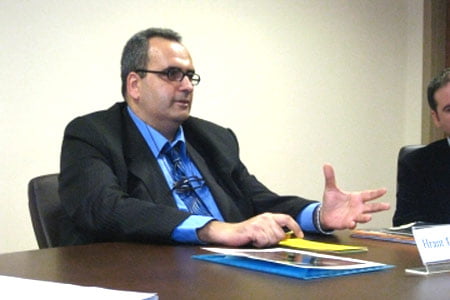 For many years I have attended the love-filled Ramadan iftar dinners arranged by the Journalists and Writers Foundation. My Lord allowed me to meet very valuable people at these dinners. Since it is impossible to write all their names in this column, I wanted to mention a few old friends in particular like the worthy journalist Mr. Cemal Uşşak hodja, Mr. Mustafa Yeşil, and Mr. Harun Tokak. How happy I am that God allowed me to acquire all these friends. Similarly, just as I was able to meet my father’s friend Professor Nevzat Yalçıntaş, he and his advisor Ahmet Almaz were at my father’s side in the hospital room during his final days. Just as I met Bakırköy District Administrator Mr. Dursun Ali Şahin, I also had the honor of meeting Mr. Fikri Köse, former Maltepe mayor. I hope that those friends whose names I did not mention will not be offended.

My beloved father, for whose soul I ask mercy, met his Creator on November 22, 2008, the date of his wedding anniversary. After my father’s death my family and I once again saw the meaning of the words “Friend” and “Fidelity” from these friends I love and value. They befriended my family during difficult days. Today’s Turkey, which is becoming more democratic, developing and opening its sails for great horizons, will have greater need for NGOs like the Journalists and Writers Foundation on the road to European Union membership. As one who has served in high-level management of NGOs for approximately 13 years, I wish that every Turkish citizen could see and hear with his own eyes and ears the respect and esteem given inside and outside of the country to both institutions for their domestic and international work.

According to my observations as a person who has had the opportunity to serve my country together with institutions I worked with on projects realized with offices of the Governors, the District Administrators and the Municipalities regarding the approximately 91 projects related to natural disasters occurring in Turkey since 1999, disaster has two meanings. One of these is “Natural Disasters” like earthquakes, floods, fires, avalanches and mud slides. The other kind of disaster is “Human Disaster” like human prejudice, racism, violence and war. I hope that with the determined efforts and democratic advances of our Prime Minister Recep Tayyip Erdoğan, human disasters in our country will finally come to an end. In particular I want to mention the Head of the Armenian Community, a living legend. The “Universal Tolerance, Culture and Art and Solidarity Association,” which was founded under the leadership of Mr. Jerry Hirimyan, my artist friend and a great man who has dedicated his life to peace with his music compositions and songs, has begun preparations for the restoration of the historical mosque in Erivan which is famous for its turquoise tiles. I am going to write more about this association and its work in the next issue.

The love, respect, good hospitality and heartfelt sincerity I witnessed during my first visit to the Journalists and Writers Foundation that I have kept hidden inside for years pushed me to share my memories and my views on some current issues in this sincere newspaper. When I entered the Foundation building, I felt the excitement, happiness and warmth of returning home from school in my childhood.

It is fortunate that you exist…

MARKAR ESAYAN As Turkey is putting an end to its denial policy or at least going through a significant change in this regard, it is impossible to stick to the red lines of the old ideological mentality concerning the 1915 forced relocation of Armenians. The democratic progress made and reforms implemented during the last 10 […]