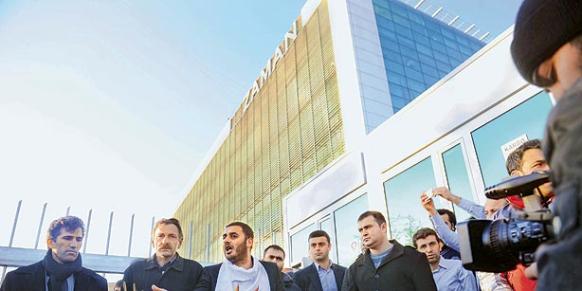 The pro-government media have been the main actors in ongoing efforts to cover up graft allegations against the government by turning the Hizmet movement and civil servants trying to do their jobs into a target.

On Dec. 17, 2013, a prosecutor ordered the arrests of several businessmen close to the government and the sons of four ministers as part of a massive graft investigation. In what followed, the Justice and Development Party (AK Party) responded by removing from office the prosecutors and police officers who carried out their orders and branding the Hizmet movement a criminal organization, accusing it of being behind the graft allegations which it says are a plot. However, many voice recordings — the authenticity of which has been confirmed by Prime Minister Recep Tayyip Erdoğan — have been leaked, indicating that the allegations are true.

The pro-government media — or more correctly the “government media,” as it has become apparent that they have been bought by businessmen under orders from the prime minister — has manufactured and published lies about the Hizmet movement, which has a four-decade proud history in Turkey, in an attempt to create the perception that it is a criminal organization. Anybody who does not agree with the government has been designated a member of Hizmet, including civil servants doing their jobs and fully acting in accordance with the law.

When the graft allegations first surfaced in December last year, the pro-government media first accused Israel of being behind the charges, then turned to the US and finally decided it had all come out of the Hizmet movement. So far, they have tried everything to undermine the reputation of Hizmet movement, even forming alliances with old enemies. With the backing of its media, the government even tried to intimidate the parents of children who attend Hizmet affiliated schools.

Even AK Party deputies who resigned because of increasingly anti-democratic practices were turned into targets to be attacked. Here are some of the black media campaigns that are part of the power-intoxicated government’s psychological operation to finish off the Hizmet movement:

The government media, in an attempt to associate the Hizmet movement with crime, made up the story that the phone lines of 7,000 people in Turkey had been wiretapped. Prosecutor Adnan Çimen, who government newspapers suggested had ordered the wiretapping of 7,000 phone lines while working for the Tawhid-Salam terrorist organization, denied the allegations. It also became evident that it is technically not possible to eavesdrop on 7,000 lines during an investigation.

The government media recently started attacking Turkish schools abroad that have made Turkey proud in every country in which they have opened. Many untruthful stories about the schools have been disseminated through the government media.

Individuals associated with the Hizmet movement, as well as pro-democracy journalists and writers, have been declared traitors by the government media. Individuals such as Nazlı Ilıcak, Yavuz Semerci, Cüneyt Özdemir, Ahmet Hakan, Adem Yavuz Arslan, Hasan Cemal Mehmet Altan, Mustafa Akyol and Fikri Akyüz have been subject to threats from the columnists of the government media.

Police officers and the media

The first people to be attacked by the government media were the police officers who carried out the orders of the prosecutors as part of the corruption investigation. The government media tried to make the public forget about the millions of dollars in cash found in people’s homes. They even went so far as to claim that those who had carried out the graft investigation were trying to overthrow the government. They claimed that the Hizmet movement had “infiltrated” the police force, starting a witch hunt inside the force. A total of 15,000 officers were reassigned to new locations while some were suspended indefinitely and deprived of their social security rights.

The judiciary was the next target of these newspapers after the police force. They flashed headlines on their front pages to defame the prosecutors who conducted the graft investigation and the operation, at the end of which trucks laden with weapons owned by the National Intelligence Organization (MİT) had been discovered in Adana. The prosecutors were accused of being members of the “parallel structure” which the prime minister says is trying to overthrow his government.

The government media also declared the members of the Constitutional Court to be members of the parallel structure after the top court’s ruling that overturned a law on the Supreme Board of Judges and Prosecutors (HSYK), because the ruling went against the interests of the government. Haşim Kılıç, the judge who prevented the closure of the AK Party at a time when a prosecutor was seeking to shut it down, was designated a member of the parallel structure.

Many individuals employed in state agencies were fired or otherwise assigned to uninfluential positions for being close to the Hizmet movement. These “purges” followed the operation inside the police force and occurred in state institutions such as the Education Ministry, the Finance Ministry, the Social Security Institution (SGK) and the Scientific and Technological Research Council of Turkey (TÜBİTAK).

The draft bill on what constitutes a state secret in Turkey that brings harsh penalties for disclosure has sparked concerns in Turkey against the background of the revelation of confidential documents that exposed massive government profiling of innocent citizens. Retired military judge Ümit Kardaş, speaking to a Turkish daily on Thursday, said giving such broad authority to the prime minister is anti-democratic. “If enacted, the state secret law will drag Turkey into fascism,” he cautioned.