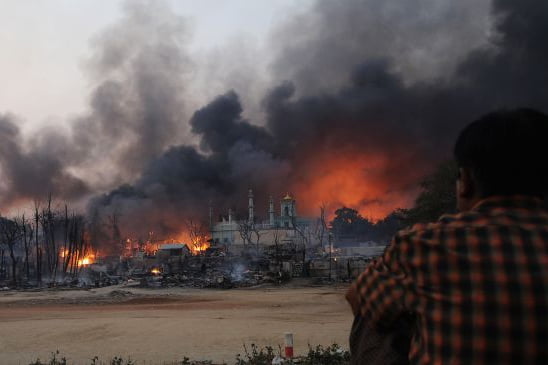 Turkish Islamic scholar and intellectual Fethullah Gülen has donated $10,000 to support Myanmar Muslims who have long faced discrimination in the Asian country and have been targeted in killings by local Buddhists.

Gülen donated $10,000, earned from the sales of his books and audio recordings, to leading Turkish charity association Kimse Yok Mu (Is Anybody There), which distributed aid packages to Muslim refugees in Bangladesh’s Cox Bazaar, fleeing one of Myanmar’s deadliest conflicts. Communal violence is grinding on in western Myanmar weeks after the government declared a state of emergency there, and Muslim Rohingyas are increasingly being targeted in attacks that have included killings, rape and physical abuse, Amnesty International said in a report.

Amnesty International accused both security forces and ethnic Rakhine Buddhists of carrying out new attacks against Rohingyas, who are seen as foreigners by the ethnic majority and denied citizenship by the government because it considers them illegal settlers from neighboring Bangladesh.

The UN estimates that 800,000 Rohingyas live in Myanmar today. Thousands attempt to flee every year to Bangladesh, Malaysia and elsewhere in the region to escape a life of abuse that rights groups say includes forced labor, violence against women and restrictions on movement, marriage and reproduction.

After a ritual prayer atoning for past sins, Ashin Wirathu, a Buddhist monk with a rock-star following in Myanmar, sat before an overflowing crowd of thousands of devotees and launched into a rant against what he called “the enemy” — the country’s Muslim minority.

“You can be full of kindness and love, but you cannot sleep next to a mad dog,” Ashin Wirathu said, referring to Muslims.

“I call them troublemakers, because they are troublemakers,” Ashin Wirathu told a reporter after his two-hour sermon. “I am proud to be called a radical Buddhist.” Read the full article on New York Times.

As the largest volunteer and global aid organization based in Turkey, Kimse Yok Mu (Is Anybody There), which holds official UN consultative status, has become the target of a smear campaign carried out through the government-controlled media, while Kimse Yok Mu officials have said all their activities are transparent and that not a single flaw has been discovered at the end of months of government auditing.

Yet another show of support for Turkey’s ongoing settlement process — aiming to end the decades-old bloodshed in the country — has been voiced, this time from Turkish-Islamic scholar Fethullah Gülen, who said some people might oppose the government’s method of solving the settlement process but for the sake of peace the process should be […]