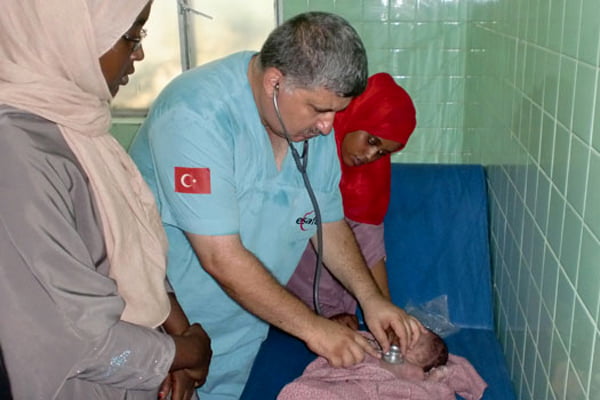 Throughout history people of all classes and origins have migrated to different places for reasons such as security, financial welfare, education, political clashes etc. However, there were people who migrated not for their own sake, but simply to help others.

There are still people today, who continue to migrate for the same reason; one can come across them in the Gülen movement. Most members of the Gulen movement who work at schools outside of Turkey in host countries move there permanently. Businessmen from the Gulen movement, too, migrate to the same places with the same intention of helping others. They support the Gulen inspired schools financially. Each and every teacher or businessperson has his/her own story of migration. The story of Lokman Çam is a bit different in that he is a doctor, not a teacher or businessperson.

“I’ve always dreamed of going to Africa throughout my education life. The tears shed for these lands have always affected me in ways words can’t express. When one day I was asked to go to Somalia as a volunteer, I felt like the happiest man on earth.” These words belong to Lokman Çam from Izmir, a volunteer member of the International Aegean Health Federation (ESAFED). Çam, who decided to voluntarily work in a place that most of his fellow doctors wouldn’t dare to come, now lives in the lands he always dreamed of. After doing volunteer work in Somalia for periods of three months in the last two years, Lokman Çam decided to migrate to Somalia. He explains his decision, “The people here need us more.” Somalis expressed their gratitude with the words: “You’ve come to our aid when everyone else is abandoning us.” Çam’s greatest support to his decision – which shocked even the Somalis – came from his wife and his kids. His two kids who go to college gave their blessings to their father. Lokman’s life from Turkey to Somalia is worthy of being made into a movie.

Çam was born into a poor family. His family could not afford to buy college prep books. He borrowed books from a bookstore to study; he was admitted to Medical School of Erciyes University. One day his roommate was talking about countries that suffered from poverty and suggested they all should go to those countries to extend a helping hand. He jokingly assigned all friends there to a country. He said Lokman Çam would go to Africa. Çam had been surprised at this joke then, but all came true.

Çam finished medical school in 1988 and did his residency nine years later in pediatrics. He got job offers from private hospitals but he preferred to work in Tunceli province despite difficult conditions there. Behind his decision lied Fethullah Gülen’s call: “May doctors go to the southeast to work,” as the provinces in southeastern Turkey had suffered huge economic and social problems. He formed a lot of friendships with the locals in Tunceli, a province populated mostly by Alevites, where Sunnis and Alevites hardly become friends. He always dreamed of Africa though. When he was asked to go to Somalia one day as a volunteer, he was exhilarated; a joke made twenty-five years ago had been granted as a prayer. He went to Somalia for the first time in October 2011.

Çam talked about his first observations of Somalia as such: “We always knew the poor conditions the Islamic world was in, but we really felt this truth in Somalia. The destitute of people, hunger, drought and terror resulted in one of the greatest tragedies of humanity.” The support and aid given by Anatolian people to Somalia is of the quality to set an example to the rest of the world in philanthropy. In the three months Çam spent in Somalia, he formed close bonds with the people of Somalia. After he came back to Turkey, one day, he suddenly decided to leave everything behind and live in Somalia. Çam who has been supported by his family throughout the whole process is planning on bringing his wife and his 12-year-old daughter over to Somalia also after settling down. His other two kids will reside in Turkey to finish their college education.

GAMZE GÜL, İSTANBUL Economy Minister Zafer Çağlayan said on Wednesday at a forum organized by TUSKON that the government is gearing up to increase the mutual trade volume with Ghana from $550 million in 2012 to $1 billion in the next two years. Speaking to participants at the Turkey-Ghana Trade and Investment Forum organized by […]