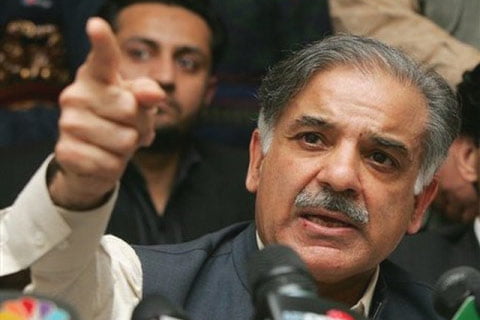 Chief Minister of Punjab province of Pakistan, Shahbaz Sharif: “I pray that relations between Turkey and Pakistan benefit both countries.”

Noting that Turkey and Pakistan have relations that are based on fraternity, Sharif said, “As whole nation, we’ve gone through disastrous calamities for all of which Turkish people have spared no effort to keep up their assistance. I am definitely very much pleased to meet with you here. I pray that the relations between Turkey and Pakistan benefit both countries. I hope these positive relations offer resources for both.”

Speaking of particularly the relief aid delivered to the region in the aftermath of the flood in 2010, Sharif announced that Ikbaliye settlement on a land of 2 hectares consisting of 296 houses built for the homeless families in Muzaffargah, a 12 classroom-school, mosques, shopping centers and parks will be available to the public on September 14.

“It’s an honor for us to have Turkish people’s aid by our side for the locals’ needs such as shelter, settlement and medication,” he stated.

The foundation has brought smiles to 20 thousand children’s faces by providing school supplies and clothing aid, in the aftermath of the great flood of 2012 and the earthquake.

Turkish artist Reyhan Karaca, who joined the KYM team in their Pakistan aid efforts, visited the orphanages in Pakistan. Karaca visited Dar al Safakah Orphanage which was built by Muhammed Ikbal as a part of relief aid activities. She noted that, as the foundation’s volunteer, she had previously been to a large number of poor regions of Africa.

Noting that they’ve been delivering Turkish people’s aid to those in need, “I’ve seen people living in hard conditions in the countries we’ve been to. I both draw lesson from their lives and try to find help for them by asking myself ‘What else can I do?” Karaca said.

KYM Secretary General Savas Metin, who was leading the aid team, noted such visits play a significant role in observing the living conditions of those in need on site and supplying the needs in the fastest and most equal way possible. He further stated that, as KYM foundation, they’ve brought smiles to 15 thousand faces in total by providing food packages of 30 kg to 1,091 families; iftar dinners for five thousand and meat packages of 5 kg for 6 hundred families.