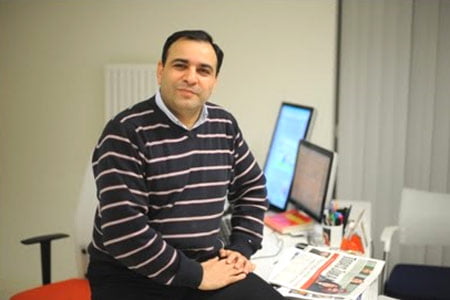 His life changed completely when a Turk moved to the apartment block where he was living in Moscow. His parents had divorced and his mother had become an alcoholic and a drug user. “I have turned into a street kid,” he had said. One day he met a member of the Hizmet movement who moved to the block. This devoted person extended a helping hand to this Russian boy regardless of his religion, language or race.

A cultural festival that has become a tradition in Turkey began on May 30. While its emphasis seems to be on the promotion of the Turkish language, the International Turkish Olympiad creates an array of bright colors in Turkey with more than 1,500 students from 135 countries singing songs and performing dances in their local clothing.

This incredible festival becoming a tradition by being held every year does not mean it is turning into a cliché. Every spring Turkey waits enthusiastically for the coming of the children of the world, who contribute significantly and meaningfully not only to global peace but also, with the waves of enthusiasm they trigger, to the unity and integrity of our country.

As part of the 10th International Turkish Olympiad, which began on May 30 and will run through June 14, 65 stages have been set up in 41 cities across the country. I don’t think any event across the globe can parallel, in scope or purpose, this event, which gathers together thousands of students from all walks of life, colors, religions, languages and races, who come from far and wide, including Japan, Siberia, Latin America and Central Asia. These kids come to Turkey from 135 of the 140 countries where Turkish schools (Hizmet schools) — which are run by Turkish entrepreneurs inspired by the ideas of well-respect Turkish-Islamic scholar Fethullah Gülen — and they not only get to know Anatolia’s rich and vast culture but also have the opportunity to promote their own cultures both to the Turkish audience and to kids from other countries.

This colossal effort that makes human-made borders between countries, cultures and nations meaningless and that eliminates exclusionary prejudices is actually a win-win formula for everyone. And it appeals in particular to the generations who are frustrated to see that they are surrounded by wars, crises, hostility, fears, insensitivity and despair. By being part of these promising efforts and enjoying the experience at first hand, they see that there is still hope for the world they live in. They firmly hold on to the compassionate and sensible hands that touch their lives coming from Turkey to the remotest corners of the world, and together and with patience and care they build a brand new world.

It is no coincidence that the official song repeated by all those who are involved in the efforts to build a new world of hope and beauty on top of the ruins of this dilapidated world of sorrow and tears they inherited from the old generations have the following revolutionary lyrics: “I saw a luminous future in my dream at one night / Lights were silently pouring down everywhere / It was like a harmoniously working clock / Dark nights had all gone away / A new world! A new world! / They were building a new world / Everywhere was sparkling like the skies / They were building a new world.”

Thanks to my job, I had the chance to see diverse people from diverse regions of the world who were building a new world either in the countries they lived or served. The cultures of these people from various countries in Africa, Asia, Europe and the Americas were perhaps different, but their purpose was all the same. I met with many people from various nations who were working at the schools, cultural centers and civil society organizations run by the Hizmet movement, a global phenomenon now, and who believe in the ideals of the Hizmet movement (aka Gulen movement) as firmly as any Turkish member of the movement would do. So it is not surprising to see an Azerbaijani schoolmaster at a school in Seoul or a Kyrgyz director at a dialogue center in Hyderabad, or many Kazakh or Turkmen teachers at a Bangkok school or thousands of members of the Hizmet movement from dozens of other countries who have internalized the mentality of the movement and are working to share it with other people.

Beyond this overall picture are also the striking stories of those whose lives are affected by these services. I had the chance to meet one such person last week at Fatih University, where I was lecturing fourth year students in the department of international relations. He was one of my students. It wouldn’t be proper for me to give his name without his permission. His life changed completely when a Turk moved to the apartment block where he was living in Moscow. His parents had divorced and his mother had become an alcoholic and a drug user. “I have turned into a street kid,” he had said. One day he met a member of the Hizmet movement who moved to the block. This devoted person extended a helping hand to this Russian boy regardless of his religion, language or race. He arranged for this kid, who was virtually deserted by his parents, to be enrolled in a Turkish school. He showed close concern for him. When this boy graduated from the school in Russia, he came to attend a university in Turkey. He both attended the university and worked at a job arranged by the Turkish Confederation of Businessmen and Industrialists (TUSKON). In this process, not only was he saved from being a vagrant, but he was also turned into a full-fledged man of Hizmet (service) beneficial to humanity.

Here is another story from South Africa. As he is already a media figure, there is no need to conceal his name. He is Nicholas Bixa. He is from South Africa. He comes from a family with nine children living in a tin house on the outskirts of Johannesburg. Bixa’s fate changed when teachers from the Horizon School, opened by the Hizmet movement, came and found him. Bixa never knew his father. His mother, who works as a cleaning lady at a hospital, could not save her kids from danger and evil deeds. “I was a naughty boy, and did everything to get myself discharged from school,” Bixa says. Yet his teachers treated him with patience. They made him love school.

After he graduated from school and began to attend a university, his four big brothers were involved in evil deeds such as homicide, bank robbery, car theft and drug use and were shot dead. His two big brothers were arrested under similar charges and sentenced to 40 years in prison. Bixa, on the other hand, returned to the school he had attended as a biology teacher and is now trying to continue the good deeds that he was a recipient of many years ago. Moreover, he is so proficient in Turkish that he can teach Turkish in Turkey. As he first got to know and love the people of Diyarbakır when he initially came to Turkey in 2005, he introduces himself as “Bixa from Diyarbakır.” And he can speak Kurdish passably well. The help extended to Bixa was also extended to his two sisters, who continue to live with their mother. As these girls were too old to be sent to school, the businessmen from the Hizmet movement offered them employment.

These seem to be two simple human stories. But it is true that there are millions of such people who are yet to be helped. Given this sheer number of people who are waiting to be helped, you may be inclined to ask, “What difference does it make?” But we should look at the matter from this perspective. Here is a well-known story: “A writer goes to an ocean shore searching for inspiration, and sees someone doing something akin to dancing on the shore early in the morning. Moving closer, he realizes this person was a young man who was picking up starfish and throwing them back into the sea. ‘Why are you throwing the starfish back into the ocean?’ he asks. The young man replies: ‘Soon the sun will rise and the water will ebb. If I don’t throw them into the water, they will die.’ The writer asks again: ‘The shore is several kilometers in length and there are thousands of starfish on it. What difference does it make?’ The young man picks up a starfish from the ground and throws it into the ocean and says, ‘It makes a difference for the starfish’.”

There are so many starfish waiting to be helped in this world, aren’t there?

International charity organization Kimse Yok Mu extended helping hand to orphanages in Mongolia during the holy month of Ramadan. Monoglian officials also thanked to the KYM and Khen ch baikhgui for their efforts and presented certificate of appreciation them.