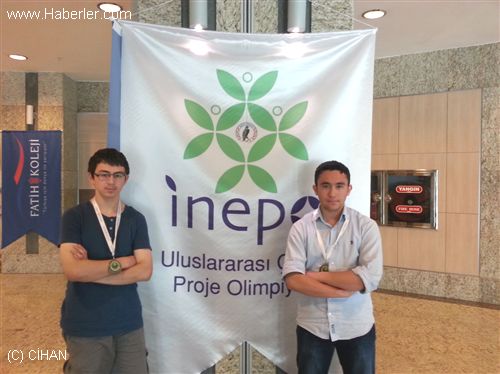 The project, which focused on using pure halogen powder to detect volatile amines practically and quickly, secured the two students the number two spot in the world.

With 25 countries participating between April 28 and May 2, the qualifying projects were displayed at the Kenyatta International Conference Centre (KICC). INEPO’s aim is to emphasize the importance of youth and international cooperation, especially because environmental problems are global in reach, and to give young people opportunities to impact their environments.

Ata Kutad Karslı, Muhammed Tarık Göktaş and Onur Hamza Baş — also students from Samanyolu Science High School — won bronze medals at the International Energy Olympiad held in Houston, Texas. The project was based on an investigation of alkaline water, which, compared to other waters, shows the effects of plant growth. The conference, which was held at the George R. Brown Center, featured 385 qualified projects from 66 countries during the week of April 28.