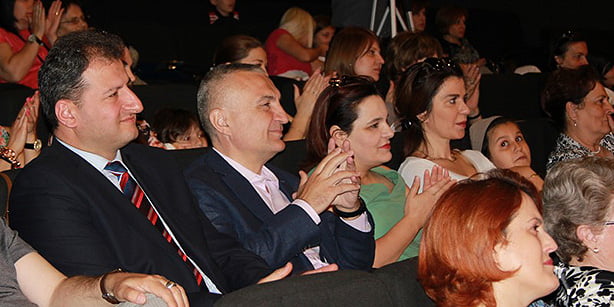 According to a story in the Dita daily, which has the second-highest circulation in Albania, Meta’s visit to Turgut Özal College in Tirana, where his daughter is studying, is a clear show of support to these schools following Erdoğan’s remarks. Meta, along with his wife, Monika Kryemadhi, attended a show at the school where he sat together with the school’s director, Hüseyin Yavuz.

Though Erdoğan once strongly promoted Turkish schools abroad — some of which he personally inaugurated, including in Albania — Erdoğan has now targeted these schools as they are established by NGOs and volunteers from Turkey who are inspired by the faith-based Gülen movement, popularly known as the Hizmet movement. It was then-Prime Minister Erdoğan who inaugurated Turgut Özal College’s elementary school on Feb. 17, 2005 during an official trip.

Erdoğan accuses sympathizers of the Gülen movement — inspired by the views of prominent Turkish Islamic scholar Fethullah Gülen — especially those in the state bureaucracy, of being behind a major corruption investigation that went public in 2013, implicating members of the ruling Justice and Development Party (AK Party) government and Erdoğan’s inner circles.

Erdoğan’s current efforts to declare such schools as having been formed by a terrorist organization — a reference to the Gülen movement, which has hundreds of schools around the world to promote education with the aim of facilitating inter-faith and inter-cultural dialogue — created unease and stirred a backlash from Albanian politicians.

Speaking in a parliamentary session on Thursday, Ben Blushi, a deputy from the ruling Socialist Party of Albania (PS), which came to power in 2013, called on the government to reject Erdoğan’s request and said Albania is not a colony of Turkey. Stressing that internationally recognized terrorist organizations are only determined by UN Security Council (UNSC) resolutions, Blushi said, “No country’s president can ask for such a thing [labeling a civil society movement a terrorist organization] while on his visit to another country.” Blushi also argued that so far no one has seen, anywhere in the world, a terrorist organization that has not killed anyone, adding, “The schools that Erdoğan seeks to close down have contributed to the education of thousands of people in Albania.”

According to Blushi, Erdoğan asked Albanian authorities for a gift, the closure of the schools, in return for the construction of the Namazgja Mosque in Tirana. Former Albanian Economy Minister Arben Malaj called on the Albanian president for clarification about Erdoğan’s request. The Turkish economic presence in Albania may have value, but in terms of democracy, Turkey cannot be a model for Albanians, Malaj argued.

Ilir Kulla, who acted as an adviser to the Albanian president from 2007 to 2010, noted that the Turkish schools have been operating in Albania for 25 years and have proven their value during that time. “These institutions pay their taxes to the state and provide education in line with the laws. We respect Turkey and Erdoğan, but we have no reason to close these schools,” Kulla summarized.

Adela Salla, an Albanian graduate from Mehmet Akif Turkish College in Albania, also reacted to Erdoğan’s comments via her social media account. Salla said Erdoğan has redefined the meaning of “terrorism” and dares to ask an independent country to shut down schools as a condition for the continuation of Turkish investments in the country. “Don’t know how this man got another mandate but I feel sorry for Turkey!” she wrote.

I don’t believe that I have a special mission. I am trying to be able to be a human being among other human beings. The honor God has granted us as “humanity” is sufficient for me.