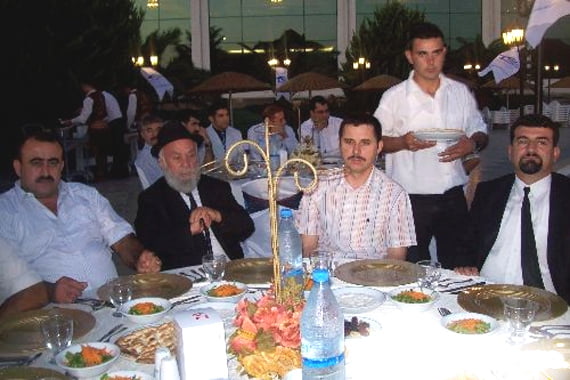 The event started with a show of whirling dervishes and it continued with Quran recitation.

The president of Antioch Intercultural Dialog Association, Isa Aydın noted in his speech that the beautiful people of the beautiful Antioch, for centuries have been living in peace and brotherhood and this beautiful tradition will continue to the future.

Kimse Yok mu Association vice president Eyüp Tok told the audience that they have been travelling since the first day of Ramadan, starting in Denizli and have arrived in Hatay after visiting Afyon, Konya, Karaman, Adana and Mersin, and for 30 days they will project spiritual beauties of provinces to Turkey and to the world.

Antioch Jewish Community president Şaul Cennudioğlu noted that as a Jewish community they have been living in Antioch since very old times. “Previously we had strong presence. These days our population has decreased. God willing, it will continue and we will always be living in this beautiful atmosphere,” he said.

Antioch Greek Orthodox Church priest Dimitri Doğum, after recalling people from different religions would come together and meet outside of Ramadan too, expressed that they have always been in unity and solidarity.

In his talk, Vakıflı Armenian Village Foundation president Bogos Silahlı said that the fact that people from different religions living together in peace and brotherhood was a beautiful one and it was specific to Antioch and could be observed in Antioch only.

Antioch Protestant Church priest Yakub Çeng expressed his happiness for being in unity and solidarity for the world peace.

Mufti Mustafa Sinanoğlu stated that Antioch is demonstrating an example of solidarity and brotherhood that is customary and centuries old, and that they were living it in the past, they are living it today and they will continue to live it in the future.

Altınözü Aya Yorgi Church’s priest Cebrail Kuşoğlu expressed his happiness for being in this beautiful atmosphere and wished for future Ramadan reunions.

Antioch mayor Assoc. Prof. Lütfü Savaş noted in his talk that unless someone from outside comes and asks, in Antioch they do not know who is Muslim and who is Christian, “We are all tolerant to each other. We do not inquire each other’s religions. We live together as brothers. We have no differences. Only when someone asks, we realize that we belong to different religions,” he said.