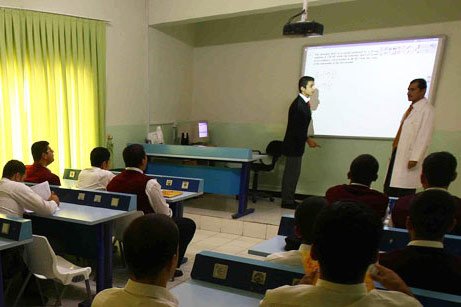 A student at one of the 30 Turkish schools in Iraq answers questions from his teacher in front of the board while other students follow. (Photo: Today's Zaman, Kürşat Bayhan)

In Turkey, education in one’s mother tongue other than the official language, Turkish, has long been an issue of hot debate, but in the Kurdish region of Iraq, students have been graduating from Turkish schools having learned four languages.

“In this area, people know two or three languages. In our schools, they learn four languages — Turkish, Kurdish, English and Arabic,” said Talip Büyük, the general director of the Fezalar Education Company, which has opened 30 schools in Iraq, 18 of them in the Kurdistan Regional Government (KRG) and the rest in various Iraqi cities, including three in Baghdad.

According to Büyük, there is no reason why a child cannot learn his or her native language in school.

“A society is enriched when it has the tools to teach its citizens their mother tongues,” he added.

Kurdish began to be offered as an elective language course in Turkish schools at the beginning of this academic term following the latest reforms in the educational system.

But many educational experts in Turkey say that an elective Kurdish course is far from meeting the demands of Kurds and falls short of solving an important part of the Kurdish problem.

The first Turkish school was opened in Arbil in 1994, Büyük said, adding that they were in Iraq when nobody was interested in the war-torn country.

“Those were years of war and conflict. The world had imposed an embargo on then-Iraqi President Saddam Hussein, and Hussein had put an embargo on the Iraqi Kurdish region. No one from Turkey was here save intelligence officers and the Turkish Red Crescent,” he said.

The schools’ first graduates entered prestigious university departments such as medicine and engineering.

“Our graduates were highly successful. Recently, the top 10 graduates in all of Iraq were from our schools,” he added.

Now there are approximately 12,000 students in Turkish schools in Iraq.

Ishik University in Arbil, which sits on a large campus, is building a faculty of dentistry, a much-needed branch in the region.

Selahaddin Ayyubi College in Sulaimaniya sees the best graduates in the Kurdish region as it is a highly selective school.

There is a special school in Halabja, a Kurdish town in northern Iraq. It opened three years ago with 100 of the brightest students, and ever since has accepted 100 more each year.

“The massacre in Halabja was the bloodiest of Saddam Hussein’s massacres,” Büyük said in reference to the March 16, 1988, attack by the Saddam Hussein government, which dropped chemical gas canisters on the town. At least 5,000 people died as an immediate result of the chemical attack, and it is estimated that a further 7,000 people were injured or suffered long-term illnesses. Most of the victims of the attack on the town of Halabja were Kurdish civilians.

“We were thinking about what to do for the people of Halabja, and we decided to establish schools for free. Students are on scholarship, and we pay for the salaries of the educators. We teach four languages in the schools,” he said.