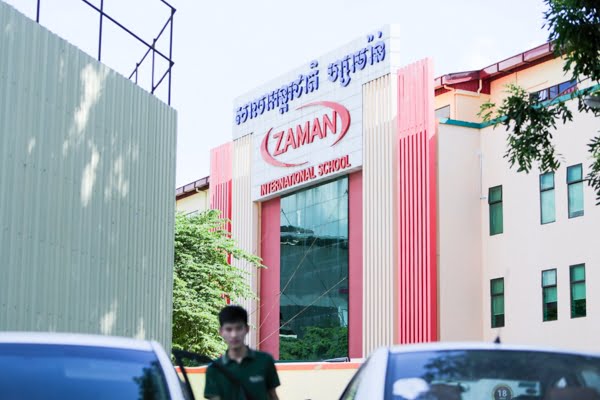 One of the Zaman international schools in Phnom Penh, which have come under fire from Turkey’s ambassador. KT/Mai Vireak

School officials said they wanted to sue the ambassador for defamation.

In an interview with Khmer Times yesterday at his office in the iCON Professional Building in Phnom Penh, Hakan Atasever, the director of public relations for Zaman, said Zaman was a private local company.

As a result, it falls under Cambodian laws and regulations. If Cambodian authorities find his company is guilty of having links with a terrorist organization, then his company must face charges according to the law. Otherwise, his company has the full right to seek legal action against any accusations that are defamatory.

“We are inviting H.E. Ambassador to show the evidence, any court decision and whatever proof he has to blame us, to the public and the authorities. We would like to announce that we will seek our legal rights as this accusation is an attempt to defame our company,” said Mr. Atasever.

When asked why the schools had the same name as the daily Zaman newspaper in Turkey, Mr. Atasever said the school was founded in 1997 by Atilla Yusuf Guleker, a former journalist who worked at that paper, the largest opposition newspaper in Turkey before the government seized control in March this year.

“As Mr. Atilla was a former journalist working for Zaman newspaper, so he was very happy to choose this name for the school too. But at that time, Zaman newspaper was neutral in Turkey. However, our school could change its name to whatever the Cambodian government wants,” said Mr. Atasever.

According to a statement issued by Zaman yesterday, the company condemned the attempted coup in Turkey last week. The company strongly supports democratic values – free and fair elections were the only way to form a government, it said.

The statement added that although the founders of ZIS were spiritually motivated by Muslim cleric Fethullah Gulen, he had never had any link with the school.

“The founders of Zaman International School started with the spiritual motivation of Mr. Fethullah Gulen. However, Mr. Gulen has never had any official link, ownership or involvement in the school administration, he has never taken a part in any sort of decision-making process in forming or running the schools,” added the letter.

The statement also highlighted the fact that the schools were launched in the presence of high-ranking government officials from Turkey. Those officials are still members of the current Turkish government.

The schools had never had a problem with the Turkish government until Monday’s press conference organized by the Turkish embassy, Mr. Atasever said.

Chan Virak, a former student at Zaman University, who is now working at Zaman’s administration office in the iCON Professional Building, said the schools had helped many Cambodians get a good education, and the schools were not affiliated with any religion.

“I went to Zaman schools from high school to university. I never heard about any religion over there. They just taught us English and skills we liked to learn. However, it’s up to the government to find out the truth in order to make the right decision to close the schools or not,” said Mr. Virak

Ms. Shorng, a grade-12 student at Zaman’s high school near the Tonle Bassac river, said she liked the school for its discipline and had never heard about any religion at her school.

“In terms of discipline, it’s really good, but for the school’s curriculum, it’s just like other schools. We never heard about any religion at our school besides the Turkish language, which was an option for us to learn if we wanted,” said Ms. Shorng.

Khmer Times was unable to reach the spokesman for the Ministry of Education for comment.

In a press conference at Turkey’s embassy in Phnom Penh on Monday, Ilhan Tug, Turkey’s ambassador to Cambodia, claimed ZIS was related to the group that recently led the failed coup to overthrow the democratically elected government in Turkey.

For this reason, he asked the Cambodian government to close the school as soon as possible.

“We have been in close contact with the Cambodian government and also the members of the parliament regarding the Zaman school in Cambodia. And we have requested all kind of support to be halted,” said the ambassador. “We would also like to see this Zaman group in Cambodia end all its activities in the near future.”

Mr. Tug also said that the Zaman group had been active in Cambodia since 1993, running schools ranging from kindergarten to university.
Zaman means “time” or “era” in Turkish. The daily newspaper was created in 1986 and originally supported the Justice and Development Party (AKP).

But later, Zaman became increasingly critical of the AKP and its leader, Mr. Erdogan, who in turn accused Zaman of supporting the Hizmet movement of Mr. Gulen. It is a movement the Turkish government accuses of attempting to establish a parallel state in the country.

According to an online source, the Hizmet movement is a liberal Islamic transnational religious and social movement led by Mr. Gulen, an Islamic theologian and preacher now living in the US. The movement is labeled by the ruling AKP as a terrorist organization.

The movement has attracted supporters in Turkey as well as in Central Asia and other parts of the world. It is active in the field of education with private schools and universities in more than 180 countries, in the fields of media, finance and health.