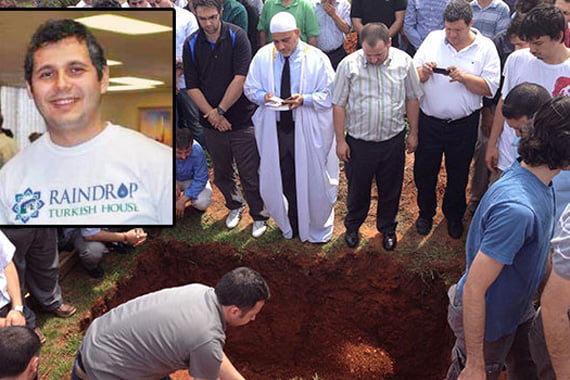 Murat Zengindemir, the 34-year-old director of Raindrop Turkish House in Oklahoma City who drowned on Thursday, was buried on July 28 after a funeral prayer service at the An-Nasr Mosque.

The accident occurred on Thursday, July 25, when Zengindemir took his daughter Ayça for a swim. Zengindemir was taken to Integris Baptist Medical Center in Oklahoma City, where he later died.

Speaking after the funeral prayer, the imam of the Islamic Society of Greater Oklahoma City said: “We gather here to fulfill our last duty to our brother in faith. We will always remember him with his smiling face and kindness.”

During the memorial ceremony, a message sent by Oklahoma State Governor Mary Fallin was read. “I am so saddened to learn of the passing of Murat. Although his time on Earth was short, he leaves a lasting impact upon the state of Oklahoma with his cheerful and kind heart. He worked tirelessly to foster a better understanding of different cultures and the importance of building relationships. I always enjoyed seeing him and appreciated his support not only of me but also for the Turkish community in Oklahoma.

I know he leaves behind a wonderful wife, Sevda, and beautiful daughter Ayça. My heart goes out to them. May God bring comfort and peace to his family and many, many friends. I will keep them in my prayers.”

Zengindemir was then buried at Mercy Cemetery.

Describing Zengindemir as a good friend, McCune-Elmore said: “Murat Zengindemir was an Oklahoma City leader whose representation of Turkish culture made our community a stronger and more compassionate place. He was an important and steady presence in community development, always sharing his gifts and skills for the greater good.

Murat embodied the values that both Turkey and Oklahoma prize: hard work, an extended hand, good humor and hospitality. His daily efforts to bring peace and well-being to our citizens were heroic. Murat was an ethical man with a high moral standard, and we should all strive to be as he was. We grieve with his wife and child, and we grieve for them.”

Goin underlined that Zengindemir’s activities as a supporter of the Raindrop Turkish House in Oklahoma City strengthened cross-cultural friendships and understanding within their community. “He will be remembered lovingly and missed greatly. Our prayers go out especially to his family and friends,” he added.

Young also expressed his grief for Zengindemir’s passing: “God is good and now we must each decide to honor this life with a concentrated effort to do more to make unity a reality. As a former president of the Oklahoma Conference of Churches, I am well aware of the effort needed to bring together individuals to share around common goals and so our loss of Murat has caused me to re-evaluate not only what I am doing but what more can I do to bring about some stronger ties because of his life. His work and life will not be forgotten.”

Orhan Küçükosman, the Turkish American Chamber of Commerce and Industry chairman in Texas, noted: “Although it has been only two years since Zengindemir and his family moved to Oklahoma, his active and loving personality has touched many peoples’ lives in Oklahoma City over the last couple of years. This is why not only [the] Turkish community in Oklahoma City but also many American people and officials attended the funeral ceremony for Murat.”

Two suspects have been arrested in connection with an attempt to set fire to a Turkish cultural centre in the northern Austrian town of Wels, police said on Monday, at a time of heightened tension between Vienna and Ankara. The attack took place in early morning and the suspects, whom police declined to identify, were arrested immediately.