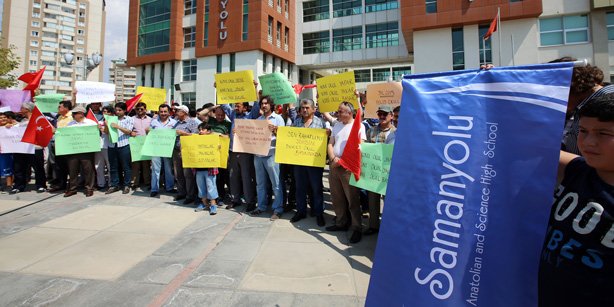 Parents of students in Samanyolu schools in Ankara protested raids of schools inspired by the Gülen movement, carried out by police and inspectors.(Photo: Today's Zaman)

The complaint will be filed against Ankara Provincial Directorate of Education Director Erol Bozkurt and Ankara Vice Governors Nihat Albant and Ayhan Çiftarslan, who authorized the warrant.

The search warrant was presented to the lawyers of the Samanyolu Educational Institutions on Aug. 20, when 10 private schools from the Samanyolu Educational Institutions group were raided by police officers accompanied by inspectors from eight government bodies, including the Ministries of Health, Education, and Finance, and the Social Security Institution (SGK), as part of a government-orchestrated operation targeting the faith-based Gülen movement, popularly known in Turkey as the Hizmet movement.

The complaint will posit that the warrant lacks legal credibility and clarity and that it violates the right to equal protection under the law, citing the expression in the warrant that states: “Concerning inspections of private schools [in Ankara] … it is deemed appropriate that inspections be carried out between Aug. 20, 2015 and the end of the 2015-2016 academic year.” One of the lawyers representing the Samanyolu Educational Institutions emphasized that not stating in the warrant the names of the schools to be inspected and the dates of the inspections is against the Constitution and the Code of Administrative Procedures.

The complaint will demand the annulment of the search warrant and compensation for the damages caused by it.

Police raids carried out at Ankara’s private Samanyolu schools have been criticized by many well-known figures, including politicians and journalists, who emphasized the success recently achieved by students attending these schools.

In 2014, Samanyolu schools won a total of 24 medals — four gold, nine silver and 11 bronze — in the 22nd National Science Olympiad and the 19th National Mathematics Olympiad for primary and secondary schools.

A number of private and prep schools that are sympathetic to the Gülen movement have been targeted by the Justice and Development Party (AK Party) government after a major graft investigation that implicated President Erdoğan and other top AK Party figures was made public on Dec. 17, 2013.

Then-Prime Minister Erdoğan accused the Gülen movement of plotting to overthrow his government. In May 2014, Erdoğan publicly advised AK Party supporters not to send their children to schools affiliated with the movement, vowing, “We will not even give water [to the movement’s members].” He has also said he would carry out a “witch hunt” against anyone with any links to the movement. Erdoğan has also ordered officials in AK Party-run municipalities to seize land and buildings belonging to the Gülen movement by any means necessary. The movement strongly rejects the allegations and no indictment has been brought against it.