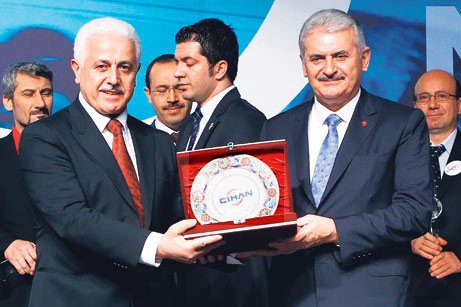 The Cihan TV network, which encompasses 94 local and regional television broadcasters, marked the 10th anniversary of its establishment on Thursday night. Members of the network, established in 2003 to strength local media, benefit from accurate, fast and trustworthy news sources for free.

A reception was held to mark the occasion with the participation of Transportation, Maritime Affairs and Communications Minister Binali Yıldırım, executive editors of over 50 regional TV stations and many well-known businessmen. Cihan General Manager Abdülhamit Bilici, Feza Gazetecilik owner Ali Akbulut, Samanyolu Broadcasting Group General Manager Hidayet Karaca, Ahmet Böken, the editor-in-chief of the state-run Turkish Radio and Television Corporation (TRT), and Doğan Şentürk, the editor-in-chief of the Fox TV news program, were all in attendance, participating in the celebration along with Cihan staff.

In the evening’s opening speech, Minister Yıldırım thanked all the managers and staff of the Cihan TV network who have been providing great support to local TV stations for 10 years. Stating that the network is almost as old as his party’s [Justice and Development Party (AK Party)] election to government, Yıldırım stated: “Actually, when we consider the progress we have made as a government over the past 10 years, your performance is almost the same as ours. You broadened your network coverage three-fold or three-and-a-half-fold in 10 years; we have made the country grow over three-fold since we came into power. You have had the same success and efficiency as the government. However, please — and no one should forget this: If stability, confidence and a strong political will did not exist in the country, making such great progress would not be possible for you.”

Stating that the network, the Cihan news agency, the Samanyolu Broadcasting Group and the Zaman daily have been offering great service to the Turkish public and have been making great achievements for 20 years, Yıldırım thanked these institutions, noting the self-devotion, goodwill and great motivation behind their success.

During his speech, Bilici expressed their satisfaction in celebrating the 10th anniversary of the original project, which is a unique example of its kind in Turkey and also rare in the world. Bilici further stated that Cihan had created news programming for 94 television channels, and lauded the network for its solution-oriented, trustworthy work with so many channels and added that there are local TV stations serving 66 provinces throughout Turkey.

“Media establishments are broadcasting programs created with Cihan’s objective and trustworthy understanding of journalism. There are various local TV stations with different political views included in the Cihan network, too. Within the project, local TV stations serving in various parts of Turkey take news that is broadcast from Cihan studios in Ankara and İstanbul every day and use it as they wish. We are proud of this. It isn’t possible for local and regional channels to follow developments in Turkey, which is integrated with the world, especially those developments that take place abroad. We follow these developments for them and bring it to their screens,” he said.

Dr. Reşit Haylamaz, editor-in-chief of the Kaynak Publishing Group in İstanbul and author of many books on the life of the Prophet Muhammad, told Today’s Zaman that the Cihan TV network has achieved a great deal in 10 years, but it is still not sufficient. “As the world improves and changes day by day, these changes are so quick that a day is even a long period. Previously, we waited 24 hours to get the news each day, but nowadays, we can’t stand to wait even a minute. Hence, the Cihan TV network has to keep working non-stop and achieve more,” Haylamaz noted.

ATV channel head Erdoğan Aktaş told Today’s Zaman that the success Cihan has achieved is an outstanding example of success. He further stated that he hopes the Cihan TV network will broaden more in the coming years.

PIOUS people in eastern Turkey, where Fethullah Gulen was born, are eager to praise him. Before hearing the preacher’s words 12 years ago, “I led a life full of women and alcohol,” admits Unal Sahin, a jeweller in Erzurum. Under Mr. Gulen’s guidance, he became devout and generous, helping a university in Georgia, and schools […]