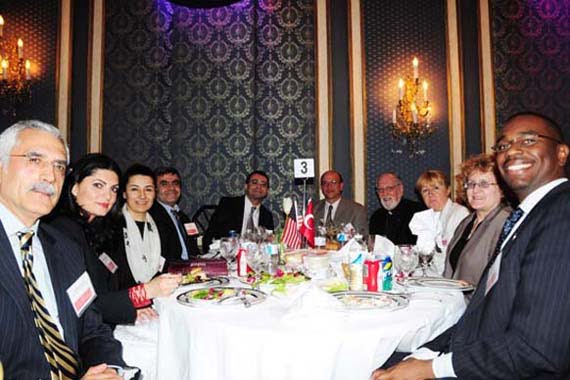 East is East and West is West and never the twain shall meet! The Turkish Cultural Centers in America believe in bridging the chasm between the east and west, seeking peace through community building.

The 6th Friendship Dinner hosted by the Turkish Cultural Center of Brooklyn, was themed ‘Hate Crimes and Young Peacebuilders’.

“Unfortunately hate and hate crimes do not go away by pretending they don’t exist. the true manner to put out the flames of hatred is by recognizing it, exposing and finally having those ind with the courage to stand against it. Those heroes are who I like to call young peace builders“, explained Zafer Akin, President of Turkish Cultural Center of NY.

It brought together many guests, including the borough president of Brooklyn, Marty Markowitz.

Senators and assembly members from New York state, were also present, to promote dialogue, and appreciate the young peace builders.

In his speech, Kalyoncu emphasized that education itself is not enough to bring peace. One needs to have a large heart, to serve humanity with sincerity.

The mayor of Istanbul, Kadir Topbas, was also present at the event.

He stressed the importance of peace building in the region, and praised the Turkish Cultural Centers, for creating an enviornment to foster peace.

Guests were later treated to the strains of the kanun, a string instrument, while enjoying a lavish dinner.

It was a motivational night for young peace builders, to have stalwarts of the community, stand by them, and praise their efforts.

“Young Peace Builders” is an Intercultural Understanding Project initiated by the Kings Bay Y and the Turkish Cultural Center in Brooklyn. The ultimate goal is to contribute to peace and harmony in the society by building bridges of long lasting friendships.

In this project, teens from Jewish-American and Turkish-American communities will come together to study the historical friendship between the Turkish and Jewish communities, to understand common history of friendship, to work on common social action projects and to compose their own vision of our past and our future.

Kings Bay Y and Turkish Cultural Center Brooklyn strongly believe that together they can make a difference in the society by collaborating on common issues, which will help the respective communities to learn and grow together.

At about the same time tonight, April 18, 2013, that a keeper of the peace at Massachusetts Institute of Technology was fatally wounded by gunshots; in the same week that some vicious destructors left bags of explosive shrapnel aimed at runners, family and children at the finish line of the Boston Marathon; in the same […]

2013 Annual Peace and Dialogue Awards by the Chicago-based Niagara Foundation were presented to their honorees at an event on September 16th in University Club of Chicago, a historic building of the city. At the ceremony emceed by Rob Stafford of NBC 5, the awards were given in the categories “Commitment”, “Public Service” and “Fethullah Gulen Award.” […]