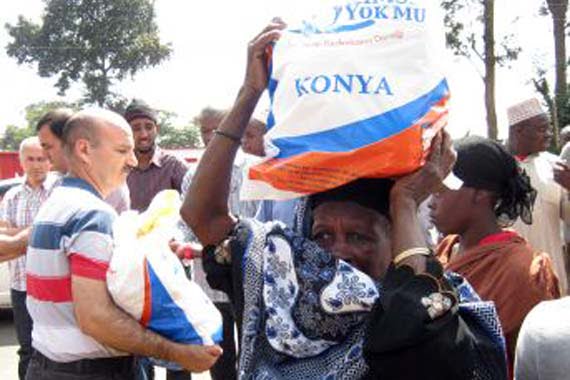 Kimse Yok Mu Foundation coming to the rescue of sufferers in need regardless of faith, language and ethnicity continues to put a smile on the world’s Muslim faces with its iftar and suhoor events in Ramadan, the month of cooperation and solidarity. One of the countries the foundation has been active is an Eastern African country, Kenya where KYM volunteers have been distributing iftar (fastbreaking dinner) and suhoor (pre-dawn meal before fasting) aid at a centrally located mosque in a Muslim Populated, tin house neighborhood in the capital Nairobi.

The philanthropists from Konya (a province in Turkey) contributed to the aid activities with both their donations and hands-on work during distributions organized by KYM in various Muslim countries including Kenya. A team of seven philanthropists, in person, distributed aid to some one thousand residents in the tin house neighborhood in Nairobi and later 300 families in the city Malinda. The team made up of medical professionals visited Omeriye Hospital construction sponsored by KYM Konya branch and a primary school of young age students, where they had talks with the school’s staff and performed small-scale medical screenings on students. They had conversations with the students as they treated them to assorted snacks. After four days in Kenya, the medical professional philanthropists employed in various hospitals in Konya departed for Turkey with a sense of fulfillment and hope for coming back in the near future.