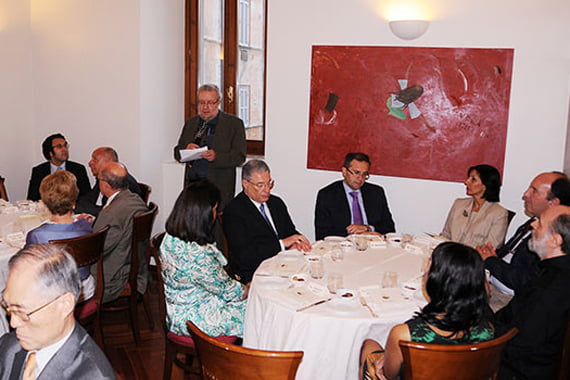 Tevere Institute in Rome gave an Iftar Dinner to diplomats who work in the Vatican. The Ambassadors from Israel, Australia, Macedonia, Mexico, Indonesia, South Korea, and Turkey attended the dinner. Some English, Russian and American diplomats were also present at the dinner.

The dinner, which took place at the San Gallo Restraunt in Rome, was preceded by a speech by the president of the Tevere Institute, Mustafa Cenap Aydin. Aydin stated that the world nowadays needs dialogue and for this reason he wishes that the number of organizations as this increases.

Prof. Kenan Gursoy, the Turkish ambassador to the Vatican, stated that it is the right time for dialogue to find solutions to the problems of the world. He congratulated the Tevere Institute for this reason and continued:

“The processes that Muslim Countries are going through create hardships, and they don’t want to feel degraded by the West. By building grounds of mutual dialogue, a new discourse can be created.”

Gulbahar Gunay who is a graduate student in Rome gave a kanoon concert at the dinner.