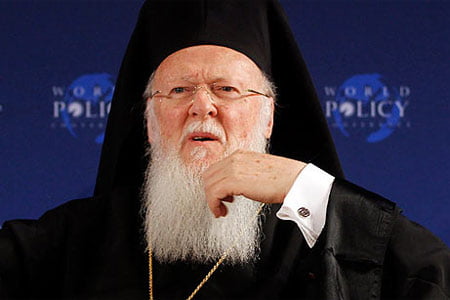 Greek Orthodox Ecumenical Patriarch Bartholomew has praised well-respected Turkish Islamic scholar Fethullah Gülen for his efforts to build intercultural dialogue in Turkey and the world in an interview he gave to a US daily. “He builds bridges, and religion should build bridges,” said the patriarch. “This is why we need the dialogues. Not to have religious fanatics who divide people. The idea is to bring people of faith together for the benefit of humankind,” he told the Chicago Tribune’s John Kass.

The US columnist said in his column on Wednesday that “Bartholomew refers to his friend by the affectionate nickname of ‘Hoja Effendi’.” Stating that recent economic and democratic liberalization in Turkey goes hand-in-hand with dialogue, Kass said, referring to Gülen: “Bartholomew has been working to build it with an Islamic Turkish theologian who now lives in Pennsylvania, is relatively unknown in America and yet has vast influence here.”

“Gülen preaches interfaith acceptance and peace. His followers number in the millions, in Turkey and across the world,” he added. Gülen is a Turkish Islamic scholar well known for his teachings promoting mutual understanding and tolerance between cultures. Now residing in the US, Gülen has pioneered educational activities in a number of countries, along with efforts to promote intercultural and interfaith activities around the world. He has written nearly 50 books in Turkish, some of which have been translated into several languages.

He was most recently honored with the EastWest Institute’s (EWI) 2011 EWI Peace Building Award for his contribution to world peace.

During the interview, Bartholomew also expressed pleasure over the Turkish government’s recent “positive” moves with regards to minority rights. “These are political questions,” Bartholomew said, “but the changes have been extremely positive. Years ago, you couldn’t have dreamed of the changes. You couldn’t have believed it.” “The prime minister has promised to restore properties confiscated from Christians and Jews years ago. He has promised to reopen the Orthodox seminary at Halki, which has been closed for many years,” he said.

“Of course, we have concerns in some areas, and there are legal questions remaining, but the Orthodox-Islamic dialogue has been extremely positive. More positive than I ever would have imagined,” the patriarch added.

The International Panel for Sharing Coexistence Experience brought together the representatives of the religions in South Korea and the religious groups in Turkey in Seoul, the capital of South Korea. The panel was jointly organized by the Korean Conference on Religion and Peace (KCRP), the Istanbul Cultural Center, which operates in South Korea, and the Intercultural Dialogue Platform (KADİP) of the Journalists and Writers Foundation (GYV).

This kind of events made our community stronger and send clear message the terrorist groups that they never will be successful to appeal the nation with their sick acts.

The room at the Istanbul Cultural Center just off the FSU campus is filled with both men and women and lots and lots of children. Many of the women are wearing colorful headscarves and long buttoned coats. And most of the men are their husbands, some associated with the university as teachers or students, and others who have taken time away from their own professions in Turkey to accompany their wives who are completing graduate studies here.