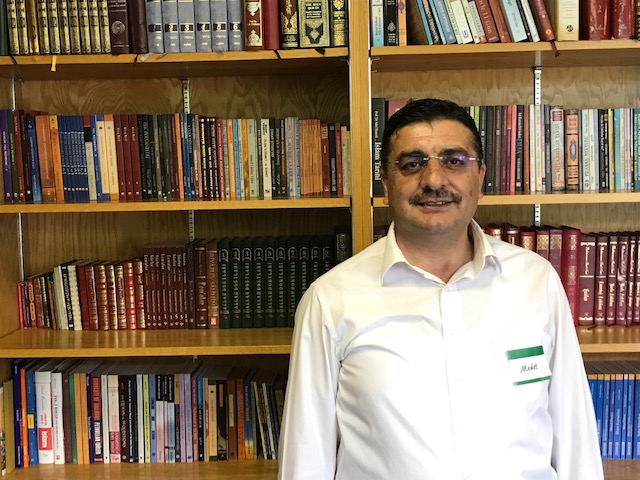 Medet Onel, director of the Albany Community Center in Rensselaer, formerly the Turkish Cultural Center of Albany. Onel fled the purge in Turkey by the authoritarian Erdogan regime. His brother was arrested as a political prisoner and has been confined in Turkey for six years. Paul Grondahl/Special to the Times Union

“This is a new beginning for us,” said Mehmet Yigit, associate professor of chemistry who runs a nanobiotechnology lab at the RNA Institute at the University at Albany. “We don’t want to feel fearful anymore. We should not allow evil to stop good.”

Yigit and about 50 people – including Turkish families and local residents who had traveled to Turkey in past years on cultural exchanges – shared a meal of Turkish cuisine on Sunday to celebrate the opening of the new Albany Community Center.

It is a new location, new name and a subtle form of defiance against threats to free speech and democratic rule.

“At least America is still a democracy. We are doing nothing wrong here and we are grateful for our freedoms here,” said Medet Onel, newly-hired director of the center. He is an educator who fled Ankara after his brother was arrested as a political prisoner six years ago and remains incarcerated.

The group formerly operated the Turkish Cultural Center of Albany from 2009 until 2017 from a building on Broadway in Menands. They shut it down and put the property up for sale because the center was under surveillance and monitored by local pro-Erdogan Turks who served as informants.

“We’re happy to see they have a nice, new facility and they are starting to come back. The Turkish people are so welcoming,” said Joe LaCivita, city manager of Watervliet. He and his wife, Diane Conroy-LaCivita, executive director of Colonie Senior Service Centers, traveled to Turkey in 2014.

The group offered Turkish language and cooking classes, invited the public to interfaith Ramadan friendship dinners and sought to bridge the cultures of East and West by leading a dialogue between Muslims and non-Muslims. There are an estimated 250 Turkish families who live in the Capital District and the group’s members include researchers, scientists, professors, state employees, restaurant owners and engineers.

“It is nice to be here today to celebrate the opening of this new center with our friends from Turkey,” said Michael Mugits, retired superintendent of the Green Island school district. He and his wife, Brenda, traveled to Turkey in 2014 and 2017. Despite the political upheaval, the couple found the Turkish people to be warm and hospitable, and they marveled at the ancient history and delicious food.

“This is a wonderful new space and it will allow them to continue to promote peace and friendship. They do a lot of good work and it’s unfortunate they were targeted,” said Azra Haqqie, the Times Union’s news informational desk coordinator and a columnist who writes on religion. She traveled to Turkey with a group of eight that included myself and my daughter, Caroline, in 2015.

A failed military-led coup in July 2016 against Turkey’s President Recep Tayyip Erdogan spurred a series of purges and military crackdowns. More than 160,000 people were detained and more than 77,000 were arrested for alleged involvement in the coup – including military personnel, police, journalists, judges, prosecutors and educators.

The Erdogan regime targeted those with ties to Muslim cleric and educator Fethullah Gulen, who lives in self-imposed exile in Saylorsburg, Pa. He is 80 years old and in declining health. Erdogan accused Gulen of organizing from abroad a coup that left 290 people dead, more than 1,400 injured and a country in disarray. Gulen has repeatedly denied involvement and U.S. authorities have refused to extradite Gulen to Turkey because of insufficient evidence for extradition. Erdogan labeled Gulen and his followers an enemy of the state and part of a terrorist organization. They strongly deny the charges and follow the teachings of Gulen, who favors a peaceful and ecumenical perspective. They call their movement hizmet, or service. They operate schools and colleges across Turkey and feed the poor.

The European Union, Human Rights Watch, Amnesty International and other groups have condemned Turkey’s human rights abuses. They criticized how the Erdogan regime used the coronavirus pandemic as a pretext to ban peaceful protests and purge those who criticize Erdogan’s policies on social media – while silencing independent media outlets.

“Unfortunately, Turkey continues to move away from democratic rule under Erdogan,” said Veysel Ucan, former director of the Turkish Cultural Center of Albany. He now runs the Turkish Cultural Center in Queens, where he lives with his wife, Ozgul, and their two children. The family led a cultural tour of Istanbul and other cities in Turkey in 2015 that my daughter and I joined. It was the final trip Ucan led for local legislators and others because the political situation became too volatile.

Ucan said that the Erdogan regime has extended its crackdown against critics and continues its assault on human rights. The country is suffering a severe economic downturn, which has diminished Erdogan’s support.

“It is terribly sad that Turkey went from a shining example of democracy to one of the worst offenders on human rights,” Ucan said.

His words hung heavily in the air. Even the sweetness of homemade baklava made of honey and pistachios, a Turkish variation, could not remove the bitter taste.

Paul Grondahl is director of the New York State Writers Institute at the University at Albany and a former Times Union reporter. He can be reached at [email protected]com

Imagine … “a world where people are deeply grounded in a moral and ethical tradition, where humility and service are highly valued and where reason, science and technology are fully utilized for the benefit of all.”[1] Does this sound like some sort of utopia that we would like to choose for the human race? A […]