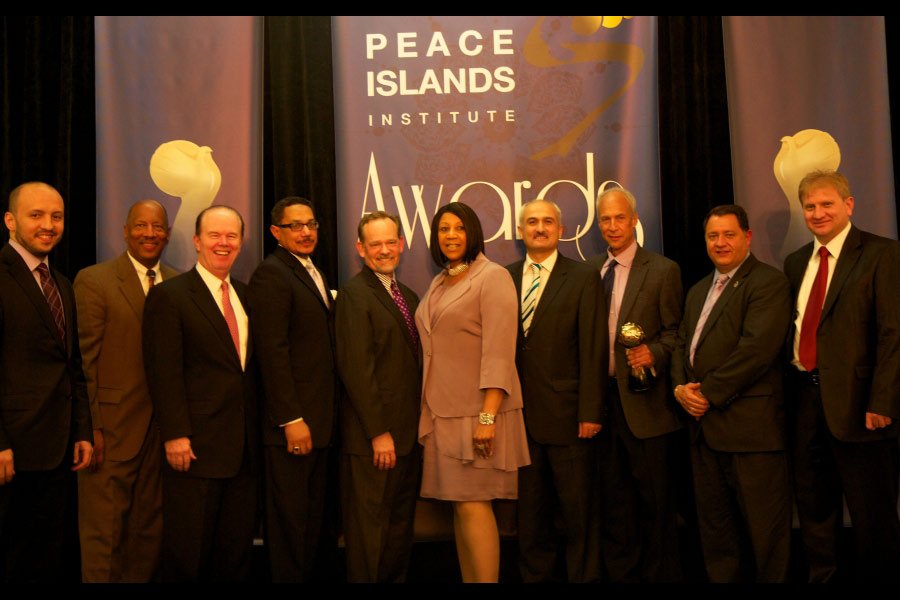 Peace Islands Institute’s 5th Annual Award Ceremony was held on June 3rd, 2012. Over 200 guests and many dignitaries joined PII to applaud accomplishments of the honorees. NJ Assembly Speaker Hon. Sheila Oliver said, “It is phenomenal to see an organization (Peace Islands Institute) has so many leaders from the corporate sector, government, non profit sector, education community of this state – all connecting up with an organization, which has as its objective: ‘elevating our consciousness and our diversity'”.

The winners of PII Art and Essay Contest were also recognized at the event. The contest for grades 6 through 12 was held for the third time and the winning arts and essays were exhibited during the reception. Winners received more than $10,000 all together.

Peace Islands Executive Director Levent Koch welcomed the guests. He said, “The reason we are gathering here tonight is simple but noble; we have come together to honor some remarkable and inspiring individuals who have committed themselves to making this world a better place for us all. We are profoundly honored to present them with awards they so justly and completely deserved.”

He continued saying his appreciation, “We value their dedication, we salute their courage, and we pay tribute to their continuous commitment. Let their devotion and courage be an inspiration to us all and may others follow in their footsteps”.

Diversity Appreciation Award recipient Hon. Sheila Oliver made a speech after she received her award: “There’s no doubt that there’s a common thread amongst all of us and I guess that is what has connected each honoree this evening to Peace Islands Institute is the Interfaith Dialogue.

I am so proud of the work that Levent and his colleagues have done with PII. It is tremendous. And someone had made a reference to how this organization has established itself, grown and expanded. It is phenomenal to see an organization (PII) has so many leaders from the corporate sector, government, non profit sector, education community of this state – all connecting up with an organization, which has as its objective: ‘elevating our consciousness and our diversity’.

I thank PII because by promoting cultural diversity, inclusion, bringing everyone to the table, taking people to Turkey it elevates peoples’ consciousness and reminds us of that our planet is a very diverse place- it does not necessarily revolve around one state, nation or government; and I think that the work that you were doing will go a long way. I commend you for acknowledging and engaging young people. I read some phenomenal essays this evening I saw artwork that was reflective of a depth of understanding of young people. To sensitize young people to issues of poverty, and social justice means that we are inculcating within young people a sensitivity that as they go through their life’s journey they will step into the realm of leadership to end this state, to promote the ideals, that so many of us, that are here this evening believe so strongly about.” She concluded by pledging to continue to work with PII in promoting the concept of cultural understanding.

“I think that work that what you’re (PII) doing will go a long way. I commend you for engaging young people. Sensitizing young people to an issue of poverty & social justice, means we are inculcating a value in young people.”

Business Award recipient James R. Coyle said after thanking the PII for being honored, “I see they really have a strong passion for what they do. The understanding they increase between cultures is so essential to world and frankly incumbent on rest of us.”

Education award recipient Asm. Patrick J. Diegnan said “The philosophy of the PII is what I try to follow everyday, all of us should strive to address these challenges each and everyday. I hope mission statement of the PII becomes a common theme around the world.”

Community Service Award honoree Prosecutor Robert A. Bianchi expressed his feelings by quoting his father, he said “My dad taught me this adage when I was younger, ‘A minority seizes authority, becomes a majority and hates a minority.’ Everyday I wake up, and I say to myself if today were my last day and I’m laying on a bed just before I’m gone, to a better place, hopefully, is it the treasure that I accumulated in dollars and cents…. in my mind and for you young folks, volunteerism like these folks do, giving more and more of yourself to others, even when its difficult to do because you’re tired… that’s the treasure of knowing that you made a difference.”

PII was presented resolutions/letters by the following elected officials:

Gülen says, “Where you are [your ego], He is not; where you are not [your ego], He is.” In the Naqshibandi Sufi order there are four steps to reaching spiritual enlightenment “forget [forsake] the world, forget the [rewards of] the afterlife, forget your ego, forget [all these acts of] forgetting,” lest being conscious of them risks making one proud. So forgetting, or in the case of tamsil, not being aware of or intending to show or guide from the outset is key.