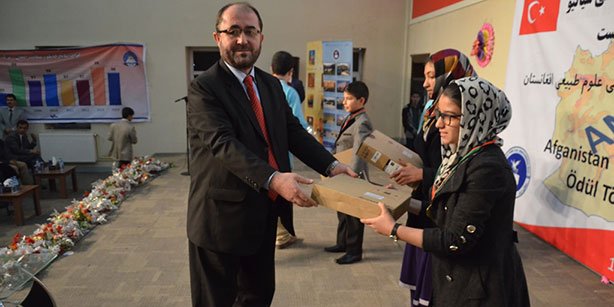 An opening ceremony was held for the Afghanistan 10th National Science Competition at the Ariana Afghan Turk High School in Kabul on Tuesday. (Photo: Cihan)

Afghan Deputy Education Minister Dr. Asadullah Muhakkik has said he is proud of his three children because they were educated in Turkish schools in Afghanistan.

Stating that 102 out of 417 projects will be displayed in the first stage, Afghan-Turkish Çağ Education Institutes (ATCE) head Numan Erdoğan said: “We aim to expand this science competition to all provinces in Afghanistan in the following years and attract the attention of every student in the country.”

Agreeing with Erdoğan, Humayun said his goal for education in Afghanistan is to help spread similar competitions across the country. Thanking the authorities of Turkish schools in Afghanistan on behalf of the Ministry of Education, Humayun emphasized that the competitions organized by the schools are important for students to express their ideas and improve themselves.

Stating that Turkish schools in Afghanistan have done a great service to the country, Muhakkik said: “My two daughters graduated from these schools and my son is studying there. I’ve learned a lot from them. They are a source of pride for me because of their education in these [Turkish] schools.” Addressing students of the school, Muhakkik said, “You are very lucky to have been educated in a school like this.”

Referring to the Turkish schools, which are active in over 160 countries, Muhakkik also extended his thanks to Gülen, whom he described as the “founding father” of Turkish schools, and the volunteers of the Gülen movement who established the schools.