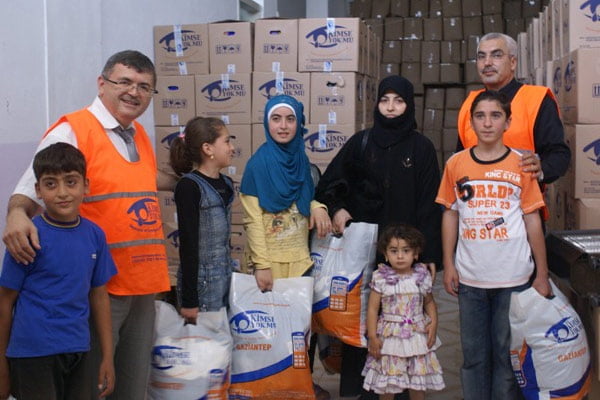 The Turkish charity foundation Kimse Yok Mu (Is Anybody There) has begun to send aid to thousands of Syrian refugees who have escaped to Lebanon and Jordan from their conflict-stricken homeland.

Tens of thousands of Syrian citizens have taken shelter in the neighboring countries of Turkey, Jordan and Lebanon. The number of Syrian refugees entering Turkey has reached almost 20,000, and these people are being accommodated and provided with basic needs by the Turkish state.

For those sheltering in Jordan and Lebanon, Kimse Yok Mu foundation has launched aid campaigns. A group of Kimse Yok Mu officials have gone to these countries to observe and examine the refugees’ conditions in order to determine their needs. Distributing the aid packages they took with them during their visit, Kimse Yok Mu officials received a lot of gratitude from the refugees, who repeatedly thanked Turkey for its help to Syrians. The officials said that the most urgent needs of the refugees are food, diapers and clothes for babies, blankets and cleaning supplies. Those who want to contribute to the foundation’s aid campaign can donate money via credit card at www.kimseyokmu.org.tr.

Mongolia selected the bests of 2012. Turkish schools that have served in the country for 18 years took the first place among high schools. The world wide Turkish schools, which are founded by philanthropists, keep being popular. The Turkish schools in Mongolia were founded in 1994.  More than 3000 students have graduated so far. Students […]