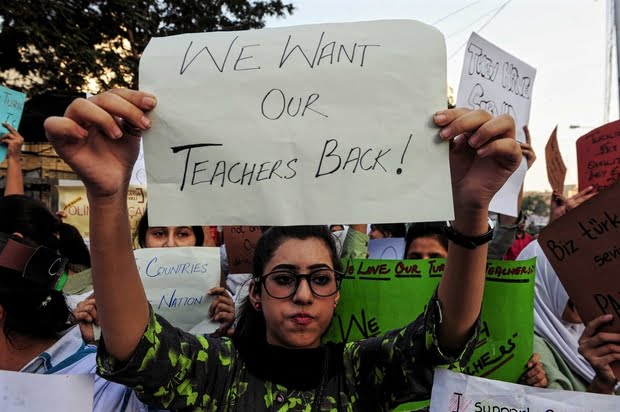 July 15th was a significant day in history of Turkey. On this day this year, a group of Turkish soldiers mounted a coup to seize control of the government and tried to oust the President Recep Tayyip Erdogan. However the President managed to address the public on TV and called them to streets which failed the coup.

As a reaction, Erdogan regime started a mercilessly coup against the alleged supporters of Gulen movement who were alleged to be behind the coup. As of today tens of thousands of people have been purged in Turkey by Erdogan government which include Army officers, Professors, Businessmen, journalists and activists.

Just a few weeks after the failed coup attempt, Turkish government approached Pakistan and asked for a crackdown on Pak-Turk Schools which they alleged are a part of Gulen network. Turkish government went on to say that Pak-Turk schools are controlled by the ‘terrorist’ organization run by Fethullah Gulen.

Pak-Turk School network was established in 1995. It’s registered under Pakistani law and operates under law of the land. At the moment over 10,000 students study in the 28 institutes of this network in over 10 cities of Pakistan. A team of over 1,500 teachers, including 134 Turkish nationals, provided quality education to the students.

It’s believed that Gulen Movement runs two thousands schools worldwide hundred and at least a hundred and twenty in the United States. Administration of Pak-Turk Schools have repeatedly denied the allegation that they are linked with Gulen Movement. Even if they are part of this network then they have not done any illegal activity in Pakistan.

Few days before the arrival of President Erdogan, federal government ordered all the Turkish staff of Pak-Turk Schools to leave Pakistan within next few days. Just 110 Turkish teachers of Pak-Turk Schools were based in Pakistan along with their families. This tantamount to a draconian decision on the part of Sharif-led government just to please President Erdogan which is condemnable.

Pakistani government supported Erdogan against the coup and it was a very good thing to do. Similarly, Pakistan needs to have good relations with Turkey for its own interests. But it’s totally unwise and unfair to disrupt a popular and quality schooling network in Pakistan just to please President Erdogan.

Furthermore, from a diplomatic standpoint if Turkey does not want its citizens teaching in Pakistan then there could have been a gradual plan to make them leave. At least the government could have waited for the end of the ongoing academic year in schools and allowed the Pak-Turk schools to make a sustainable plan for replacement of Turkish teachers. In such a case the damage to the schooling system of Pak-Turk schools could have been minimized. However, weighing pros and cons and making calculate decisions is something that current Sharif government is not familiar with.

Likewise, it’s commonly believed that the relations between governments of Sharif and Erdogan are more focused on personal level rather than at state level. This is further supported by the fact that President Erdogan in his recent visit to Pakistan attended programs by federal government and Punjab government. Other provinces were ignored like they never existed. Therefore, it’s not surprising when Sharif government goes out of the way to entertain demands of Turkish government, like in case of Expulsion of Turkish Teachers.

There were protests against the expulsion of Turkish teachers in all provincial capitals of Pakistan. Students along with their parents protested the decision of federal government and showed solidarity with their Turkish teachers. Protest is a democratic right of citizens which they use to express dissent on government policies. Unfortunately, the so-called democratic government of PML-N discarded all such protest and paid no heed to them.

In a pleasant move, Peshawar High Court (PHC) stopped the deporting of Turkish teachers from Pakistan last week. Next hearing of the case is scheduled in first week of December. Students of Pak-Turk schools have now pinned all their hopes on PHC to provide them relief for now by delaying the expulsion of their teachers.

Irrespective of what will be the final judgment of PHC, federal government has again proved that it still is not in mood to listen to the fair and genuine demands of the public.