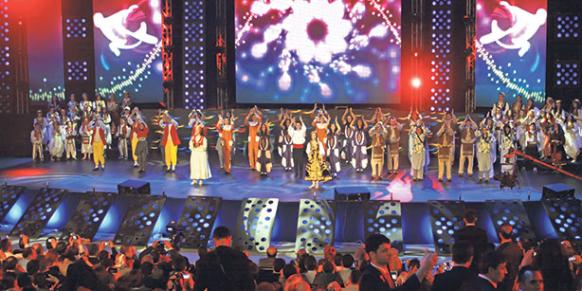 Cultural Olympics event organized by Gülen movement in the capital of Albania, Tirana in March 2014.

The Bergsonian philosophy had been a sanctuary for our intellectuals who used it to dispense with the “despair and darkness” in the face of the psychology of defeat stemming from the fall of the Ottoman Empire and drive the spiritual and psychological revival during the War of Independence. They sought to banish the effect of bleak moments by merging the modern mystical environment with folk customs and sufism in what Mustafa Şekip Tunç called creative perfection and what I referred to as a creative move — which is one of the principles of the Bergsonian philosophy.

At that time, a creative move was made, but it was hardly institutionalized because it failed to create its own generation. This creative move came years later from the Gülen movement, also known as the Hizmet movement, which has developed a new human model and amalgamate universal values with local ones. If you can develop a new generation with the reality of your institutionalization methods, that generation may be a history maker. In “Mission of the University,” José Ortega y Gasset describes this process as follows: “History progresses with leaps, not with evolution. Sudden, incredible leaps that eliminate spiritual distances are called a generation. A generation in shape can achieve what unfit centuries fail to achieve.”

With the philosophy of education it has developed for human perfection, Hizmet has merged passion with balance and moderation to obtain a transcendental morality. The principles of this morality include the loftiness of love for truth in human thought, the virtue of the attitude toward the things that belong to this world, the sense of contentedness inoculated into people against the material world, the improvement of morality by preparing people for great sacrifices through satisfaction of desires with customs and deep-rooted beliefs and the dynamism acquired through transcendence of lifestyle and the maturation of what is human.

After casting human beings in this model, Hizmet has made them functional in a way that is enviable by other social groups. Over time, this functionality has gained action that is capable of making great leaps. The energy created by this action has left a tremendous trail in history. Today, the effects of this trail are not visible to the naked eye. This is because we have yet to notice the mobilization created by Hizmet.

No movement has been able to mobilize so many young generations for education before. The people who are scattered around the world for an education mobilization have today evidenced that essential passion in them. This passion will incline toward arts, literature and philosophy in the coming years to produce great works. The criticism that Hizmet has so far been unable to come up with a real novel, science or art will melt away in the spiritual passion of future generations. This is because today’s generations are brewing science and art for history to witness. In this sense, Hizmet’s passive resistance to the current ruling party is a golden opportunity for Hizmet to overcome mediocrity.

Through its passive resistance, the Hizmet movement, also known as the Gülen movement, defies mediocrity. The significance of the metaphysical value of the movement’s stance will become more visible in the years to come because the Hizmet movement focuses on wisdom instead of material gains. In addition, it encourages man to use his ordinary habits in order to be productive and fruitful. The creative minds in the Hizmet movement contributed to the democratization of Turkey. The dershanes, or study houses, the Hizmet movement sponsored contributed to combating inequality in this country. The people who studied in these institutions had the best opportunities for their career. As noted by İdris Küçükömer, “A person exists only in case he becomes aware of the opportunities he has and picks the most appropriate one for himself; if the different opportunities are not known, then there are no choices for this person, which means the inexistence of personality.”

Through the institutions it sponsored, the Hizmet movement offered a choice to the people so that they could pick their careers. The idea of understanding the world by living in it is one of the biggest sources of motivation for individuals to participate in the Hizmet movement. It is possible for you to recognize a person who was raised in an Anglo-Saxon or Francophone education system. The Turkish education system failed to add permanent and effective behaviors to the characters of our people. However, you can see the traces of the Hizmet movement in the people who studied at its institutions all over the world. These behaviors are shaped by awareness, spiritual motivation, universal moral values, fidelity, passionate action, tolerance, respect for fundamental rights and freedoms and serving all humanity. This is actually a new and creative style of education and a beacon of hope for the future of humanity.

The Hizmet movement encourages the people who were raised in its institutions to be influential in spheres independent from state control, where voluntary and consensual participation determines the mode of relationship. What makes the Hizmet movement a unique type of civil society activism is that it did not emerge thanks to state financial support. The movement did not rely on grants or donations from the state. The state’s interference in social affairs by favoring some groups destroys the balance and creates privileged groups. These groups are protected; but at the same time elements serving as the basis for rule of law are being destroyed.

However, the Hizmet movement established its influence as a spiritual and material authority based on the consent and support of the people. Its strength stems from its ability to understand diversity in society. The movement pays attention to social partnerships and autonomous social dialogue, an important principle in the draft constitution of the European Union, to create social dialogue and partnership. By doing so, it mobilizes the innate feelings of the people to perform good deeds. Social activism, by building its own identity independently from the state, tries to influence political administrations within the rule of law.
Unlike the political administration, it does not alienate or marginalize individuals who are not organized and don’t have agency because it recognizes the elements of unorganized elements of society and respects diversity within the society. It also believes that social diversity provides an assurance against despotism. It believed that the tendency of the foundations and associations that regard themselves as civil society organizations to justify the discourse and actions of the political administration should be analyzed properly, because the current state of civil society-state relations shows us the values around which the political system is being shaped.

The greatest barrier to the improvement of civil society in Turkey is a lack of a political leadership that is tolerant of diversity. Because decisions are made by a few influential actors, full political participation has never been achieved in Turkey. The people are sheltered from extensive participation in politics. Political decision makers try to disseminate the message over media that they are protecting the people, but what they actually protect are trusts and cartels relying on interpersonal relations. To this end, the idea that voting is the only mode of political participation in the underdeveloped nations is an illusion because the voters are not able to determine the issues, demands and necessary policies in such societies. It is the political leaders who determine the agenda of society. If that leadership does not promote empathy, tolerance and participation, society is polarized by the discourse of that political leader. The current developments in Turkey confirm this. To this end, the Hizmet movement, through its social opposition, questions the idea that what is good for the leader is also good for society and thus protects the interests of society. This eventually develops into an ability to deal with society’s problems. The Hizmet movement is a movement of conscience that guarantees the autonomy and rights of the individuals by reliance on a passive opposition style.

*Turgay Yavuz is a writer based in İstanbul.