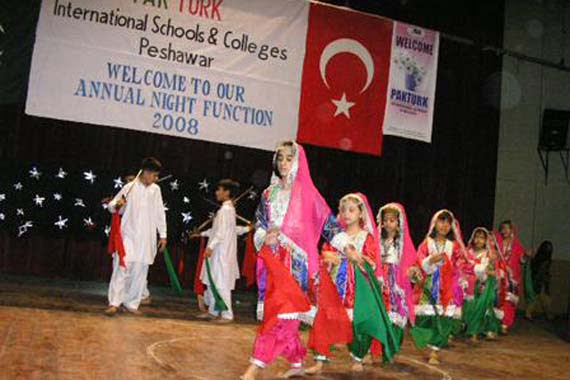 PESHAWAR: Provincial minister for Schools and Literacy Sardar Hussain Babak has called for help and assistance in all sectors to international donor agencies and Turkey government. Turkey he said was a time-tested friend of Pakistan and both the countries enjoyed excellent bilateral relationship and deep cultural ties. He was addressing as chief guest at a gathering at 8Th Annual Night function arranged by Pak-Turk International Schools and Colleges, Peshawar branch here on late Thursday night at Nishtar hall. The minister said NWFP deserved more aid in almost every sector including education and healthcare adding that his government would welcome international donor agencies and stake holders to invest and provide financial assistance to education, health and other vital social sectors.

“We are grateful to the Turkish government and her business tycoons for taking keen interest in investing and aiding in the province’s public and social sectors which will further help cementing our political and cultural ties between the two brotherly countries. We need assistance to improve our weak infrastructure and public services. I assure all out support from NWFP government to the interested groups and stakeholders” Babak ascertained. He appreciated the performance of the school administration. Earlier, Mustafa Tuncy, principal of the Pak-Turk International School, Peshawar Hayatabad branch presented a detailed report of his school’s academic performance of the students from various classes. Regarding his love for Pakistan he said, “ Turkey will be friend of Pakistan’s friend and shall remain enemy of Pakistan’s enemy. We have great regard for our Pakistani brothers.” Mustafa Tuncy announced that a student’s delegation of his school would proceed shortly to US for taking part in International Mathematics Olympiad.

The colourful show was opened with recitation from the holy Quran. Religious hymns and Pak-Turk national anthems followed it. Small kids presented a number of interesting items including tableau, humorous skits, folk dances and an impressive dress show reflecting Pakistani, Indian, Bangladeshi, Afghan, Saudi, Turkish, Chinese and German bride and groom. Also cute kids with age group 4-to 5 presented folk dances of Kashmir, Punjab, Frontier, Sindh and Balochistan. The children were very expressive and articulated in presenting various cultural activities. They sang songs in Pashto, Urdu and Turkish languages. A cute Turkish couple wearing bride and bridegroom dresses however, stole the show. Some children displayed karate show and received great applause from the jam-packed hall. The School administration gave away prizes and certificates to the students on their outstanding academic performance during 2007-08 session. Mustafa Tuncy presented shields and school souvenirs to the visiting Turkish delegation and also to Dr Haroonur Rashid, Fazle Ahmed, Dr Khalid Sultan and others for their support. The annual gala was attended by large number of teaches, students, parents and eminent city education stakeholders.