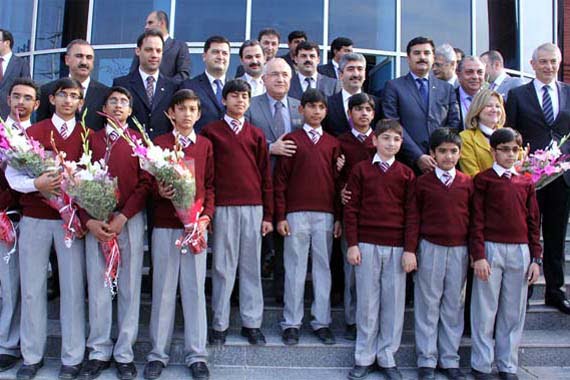 Many students of different schools bagged cash prizes from Rs50,000 to Rs30,000 while Abdul Moeez Ijaz, a Grade 8 student of Jinnah Preparatory School Islamabad was declared Al-Khwarizmi of Pakistan for his outstanding performance. He will retain the title for one year.

Speaking at the occasion, Speaker of the Turkish Grand National Assembly Cemil Cicek said that Turkey would continue supporting Pakistan, which is a great and trustworthy friend. “We are tied in the religious and cultural bonds which should be further strengthened. Our government as well as masses value multidimensional relations with Pakistan which would by further cemented by the passage of time.”

Deputy Speaker Faisal Karim Kundi said that Turkey is promoting education in Pakistan by establishing quality institutes and holding different competitions aimed at enhancing the level of students. “Our students are being prepared to compete in the international events while many have won medals, which is a great achievement,” he said.

Turkish Ambassador Babur Hizlan said that Pakistani youth had tremendous potential and amazing talent to make progress and advance in all walks of life. “Improving, educating and promoting the brightest Pakistani students is one of our missions.”

Senegalese Media Owners Association Chair Madiambal Diagne says that the Turks should also be appreciated because of their approach toward education. “The best way to help people in another country like ours is to extend support in the field of education. The people who receive this educational support become industrious and decent and do their job properly.

Religious Affairs Directorate President Mehmet Görmez visited a Turkish Schoolin the Cameroonian capital of Yaounde on Monday, where he praised the contribution of Turkish schools in Africa. Görmez, accompanied by Turkish Airlines Chairman Hamdi Topçu, was welcomed at the Amity International Turkish School with a ceremony by students and school administrators. The visitors listened to […]