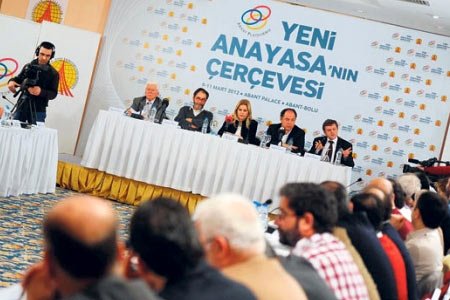 This year’s Abant Platform, held from March 9 to 11 in the northwestern province of Bolu, tackled the pressing issue of shaping Turkey’s new constitution. A broad range of intellectuals, lawyers, political leaders and journalists discussed the problematic areas of the constitutional drafting process.

The new constitution, about which Parliament Speaker Cemil Çiçek said during his opening speech at the platform, “If we miss this opportunity, a new constitution will remain an unfulfilled dream for the next 30 years,” is scheduled to be completed by the end of 2012. As with every Abant meeting, a summary declaration of the platform’s conclusions was released, and comments were made by columnists who attended the gathering.

“The most significant point talked about at the platform was that the constitution currently being drafted will be transient. It was not mentioned much during the platform, but deep down every one knows it will be a transient constitution and will lead to another constitution in the following years,” says Taraf’s Orhan Miroğlu.

He emphasizes how the Abant Platform reflects not only the intellectual segment of society but the common views held by every segment of society in general and that the attendance of representatives from the main opposition Republican People’s Party’s (CHP) at this year’s platform added to its comprehensiveness. Miroğlu says that 2014 will be marked by local and presidential elections, and then general elections, and therefore Parliament Speaker Cemil Çiçek must think that if the new constitution is not completed by 2013, there will be no chance of fully focusing on it during the time of elections, which is why he is giving all his time and energy to the drafting process. Miroğlu finally adds that the Abant Platform has shown once again that the most difficult issues to be agreed upon for the constitution concern the Kurdish question. Gülay Göktürk from the Bugün daily discusses the “most difficult issues” as Miroğlu defined and says the most crucial session of the platform was titled “Unitary state and local administrations while looking out for the emergence of new autonomies.” This session was directly related to the Kurdish question and its most problematic subjects. The main suggestions mentioned during this session were changing the definition of citizenship in the constitution, getting rid of the frequent emphasis on Turkish ethnicity in the constitution and allowing education in Kurdish and other non-Turkish languages. These suggestions are likely to be accepted, but education in languages other than Turkish and Kurdish is not expected to be approved.

Stressing that In Turkey or elsewhere, authoritarian rulers have exploited the differences within the society to polarize various groups against each other, Gülen said “citizens should come together around universal human rights and freedoms and be able to democratically oppose those who violate these rights.”